Lotus Notes and Domino Has Grown to 140 Million Users Worldwide 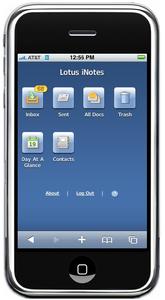 (PresseBox) ( ARMONK, NY, 08-10-01 )
IBM (NYSE: IBM) today announced an expansion of its Lotus Notes and Domino collaboration flagship software to new markets and users with a new version that delivers higher levels of mobility and security for the iPhone(TM) and another that protects companies from Internet-borne threats such as spam and viruses.

The ability to connect to secure business email on devices such as the iPhone is an example of Tomorrow at Work, an IBM initiative that examines a changing work world and anticipates trends in technology, business, society and culture.

Debuting as a Top 20 pick on Apple's Web application page, Lotus iNotes(TM) ultralite is a software download that allows a person to do Lotus Notes email and view calendar and contacts using the iPhone. iNotes is available at no extra charge to people who have a Lotus Notes software license and is also included with IBM's new Lotus Notes software 8.0.2, which raises performance significantly, and uses 20 percent less memory than the previous version.

Notes 8.0.2 also includes an updated version of Lotus Symphony, an easy-to-use document, spread sheet and presentation software package based on the Open Document Format. This newest Symphony has improved compatibility with Microsoft Office and now supports 28 languages. The four new ones are Catalan, Slovakian, Slovenian, and Thai.

iPhone users can access Lotus iNotes ultralite through an intuitive interface via the Safari browser. For added security and protection of corporate data, iPhone users can choose to use IBM's Lotus Mobile Connect virtual private network software along with ultralite. The latest version of Lotus Mobile Connect, which became available at the end of June, makes the ultralite sign-on process even easier.

Here are comments from businesses that have started doing Notes email using their iPhones:

"We've been using Lotus Notes and Domino software for years. Now that there's a light version for the iPhone, we're completely rethinking our mobile strategy. Lotus iNotes ultralite simplifies the way we transfer email and calendar information to cellular phones, which could save us a lot of trouble and money," said Jason Michels, who manages the email network for Aurora Health Care, an integrated health care provider in Wisconsin. "It's possible we'll see a lot of people with iPhones around here because of this," he added.

"It's technology like this that enables us to be the kind of focused, smart agency that we are. As our clients and their needs continually evolve, we're challenged to stay a mammoth step ahead. We're in the business of creating energy around ourselves and all those we encounter, and without tools like iNotes, that wouldn't be possible," said Curtis Pogue, Systems Administrator at Vladimir Jones, an integrated marketing communications agency based in Colorado.

"I really like the iNotes ultralite mode. It is very fast, works well and has the same look and feel of the iPhone user interface. Congratulations to IBM on this introduction of support for the iPhone," according to Andy Brunner, Principal and Owner, ABData Information Technology Consulting and Engineering, in Zurich, Switzerland, IBM Business Partner and member of the Masters of Lotus Notes community.

IBM's new Lotus Protector for Mail Security, which protects companies from Internet-borne spam and viruses, is also available now. The first offering in the new Lotus Protector security family, it shields Notes and Domino systems and users from harmful and inappropriate content, and secures company data from unauthorized access. Lotus Protector for Mail Security features a high-performance engine with comprehensive scanning and filtering techniques. It also features a sophisticated rules engine to block incoming and outgoing content based on customer specifications.

Lotus Notes and Domino has grown across small-medium business, and is used by more than half of the largest 100 corporations in the world, 80 percent of the top 10 global companies in banking, telecommunications, aerospace and defense, consumer products, electronics, insurance and pharmaceuticals.