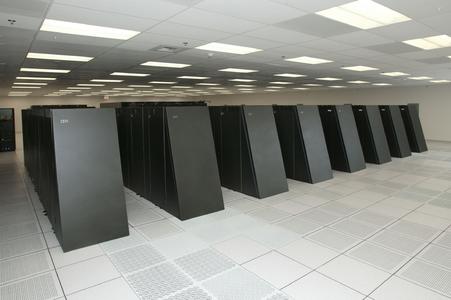 (PresseBox) ( WASHINGTON, D.C., 06-06-23 )
Today, the Department of Energy’s National Nuclear Security Administration (NNSA) and IBM teamed up to announce that a new mark was achieved on the world’s fastest supercomputer named BlueGene/L (BG/L). This world record for a scientific application was set by achieving a sustained performance of 207.3 trillion floating-point operations per second (teraFLOPS) on the “Qbox” computer code for conducting materials science simulations critical to national security.

BG/L is an IBM supercomputer housed at NNSA’s Lawrence Livermore National Laboratory, and is ranked as the world’s fastest supercomputer by the Top500 (www.top500.org). It is used to conduct materials science simulations for NNSA’s Advanced Simulation and Computing (ASC) program, which unites the scientific computing know-how of NNSA’s Los Alamos, Sandia and Lawrence Livermore national laboratories. The computer simulation capabilities developed by the ASC program provide the nuclear weapons analysis that NNSA needs to keep the nuclear weapons stockpile safe, secure and reliable without underground nuclear testing.

“This is an important step on the path to performing predictive simulations of nuclear weapons, and these simulations are vital to ensuring the safety and reliability of our nuclear weapons stockpile. These results further confirm that BlueGene/L's architecture can scale with real-world applications. The performance of the Qbox code was made possible by the partnership with our IBM collaborators, who helped to optimize the code’s performance on BG/L’s 131,072 processors,” said Dimitri Kusnezov, head of NNSA’s ASC Program.

The performance improvement over previous efforts was due in large measure to new mathematical libraries developed by software researchers at IBM that take best advantage of BG/L’s dual-core architecture.

“Today’s results represent the first time in history that a scientific code has sustained a level of performance in excess of 200 teraFLOPS, breaking the former record also set on Blue Gene at Lawrence Livermore National Laboratory,” said David Turek, vice president of Deep Computing at IBM. “Only through collaborative innovation such as through our partnership with the National Nuclear Security Administration and Lawrence Livermore National Laboratory can the boundaries of computing be pushed as far as they’ve been today. We will continue to work together, pushing the boundaries of insight and invention to advance our shared mission in ways never before possible.”

Qbox is a first-principles molecular dynamics (FPMD) code, designed to predict the properties of metals under extreme conditions of temperature and pressure - a longstanding goal for researchers in materials science and high energy-density physics. FPMD codes are used for complex simulations at the atomic level in a number of scientific areas, including metallurgy, solid-state physics, chemistry, biology and nanotechnology.

The “Q” in Qbox is for “quantum,” a reference to the quantum mechanical descriptions of electrons that are the principal focus of this type of simulation code. The ability to accurately model changes to the electronic structure of atoms distinguishes FPMD codes from classical molecular dynamics codes.

The three-dimensional code run, studying how molybdenum (a transition metal) atoms behave under pressure, represents one of only a handful of “predictive science” simulations achieving this size: 1,000 molybdenum atoms. While classical molecular dynamics calculations are frequently run with billions of atoms because the interactions between the atoms are relatively easily computed, routine quantum runs, which are both very complex and accurate, have been restricted to around 50 atoms until now. The difference between 50 and a 1000 makes the difference between being able to explore new classes of chemical systems using first-principles methods, including heterogeneous environments (considering interactions between unlike molecules) and extreme chemistry (including shocks). Such a step is important to NNSA’s stockpile stewardship program, and also has important implications for biological systems, including the study of proteins.

Predictive simulations allow researchers to understand how complex physical, chemical and biological systems behave over time, where it was previously only possible to get brief snapshots at a smaller scale. This capability to do predictive science is important to NNSA’s national security mission, as its researchers try to understand how the materials in nuclear weapons age, particularly for those warheads that have aged beyond their intended life. Furthermore, the performance of the Qbox code, specially designed to run on large-scale platforms such as BG/L, has implications for the broader research community and will likely enable the development of new materials of interest to many industries.

“The combination of this code and this computer, both products of a partnership between ASC and IBM, has implications for the broad research community well beyond NNSA’s mission of stockpile science. Such spin-off benefits often accompany focused programmatic efforts to foster technology. This was certainly true for NASA during the years of the moon landing and is true today,” said Kusnezov. “Disruptive advanced architecture work for ASC leads to low-cost, but highly useful computers that benefit the nation well beyond national security.”

Established by Congress in 2000, NNSA is a semi-autonomous agency within the U.S. Department of Energy responsible for enhancing national security through the military application of nuclear science. NNSA maintains and enhances the safety, security, reliability and performance of the U.S. nuclear weapons stockpile without nuclear testing; works to reduce global danger from weapons of mass destruction; provides the U.S. Navy with safe and effective nuclear propulsion; and responds to nuclear and radiological emergencies in the U.S. and abroad.

Wir schwimmen in einem Strudel aus rasanten, aber wundersamen technischen Entwicklungen, drohenden ökologischen Katastrophen und erschütternden sozialen Umwälzungen. Was tun, damit die nächsten 30 Jahre doch noch schön werden? Befragen wir ein Orakel! read more
The publisher indicated in each case is solely responsible for the press releases above, the event or job offer displayed, and the image and sound material used (see company info when clicking on image/message title or company info right column). As a rule, the publisher is also the author of the press releases and the attached image, sound and information material.
The use of information published here for personal information and editorial processing is generally free of charge. Please clarify any copyright issues with the stated publisher before further use. In the event of publication, please send a specimen copy to service@pressebox.de.