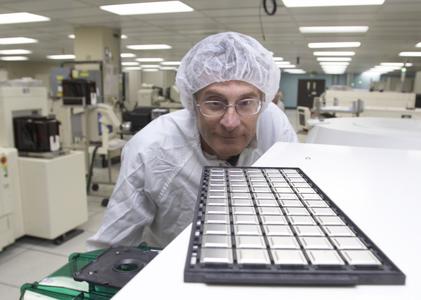 (PresseBox) ( Armonk, 06-09-08 )
IBM today announced that the microprocessors that will serve as the digital heartbeat of Nintendo’s upcoming Wii™ video game console are being shipped from IBM’s state-of-the-art East Fishkill, N.Y., fabrication facility.

Under the terms of the agreement, IBM will produce millions of fully tested, Power Architecture-based chips featuring IBM Silicon on Insulator (SOI) technology at 90 nanometers (90 billionths of a meter), based on the specifications of the custom design agreement previously agreed upon by the two companies. The chip is being produced at IBM’s state-of-the-art 300mm semiconductor development and manufacturing facility in East Fishkill, N.Y.

Silicon on Insulator technology from IBM helps deliver to Nintendo a generous improvement in processing power while achieving a 20 percent reduction in energy consumption.

Microchips based on the Power Architecture are the electronic brain of devices large and small, powering automotive safety systems, mobile phones, wireless routers, backoffice servers and the world’s most powerful supercomputers.

"The IBM team has worked hard to design, develop and deliver this customized Power microprocessor for the worldwide launch of Nintendo’s new system,” said Ron Martino, director, IBM Technology Collaboration Solutions. “When millions of gamers take the controls of Wii this holiday season, the IBM logo will once again be front and center on this innovative new product.”

The relationship between IBM and Nintendo dates to May 1999, when IBM announced a comprehensive technology agreement to design and manufacture the central microprocessor, often referred to as the “Gekko” chip, for the Nintendo GameCube™ system from its Burlington, Vt., production facility.

The worldwide leader and innovator in the creation of interactive entertainment, Nintendo Co., Ltd., of Kyoto, Japan, manufactures and markets hardware and software for its popular home and portable video game systems. For more information about Nintendo, visit the company’s Web site at www.nintendo.com.