High-precision optical measuring system made in Bremen: start-up of a new high-tech company 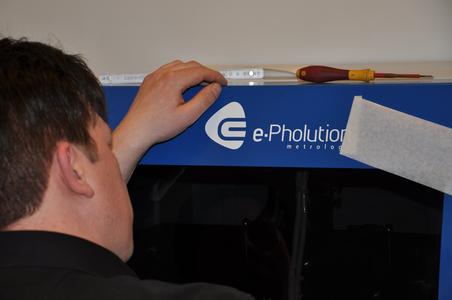 (PresseBox) ( Bremen, 14-01-08 )
Researchers of the University of Applied Sciences in Bremen have developed a novel measuring system for special optic devices, won a prize for it, and founded a business. The patents and marketing agency InnoWi in Bremen applied for several patents and held the license negotiations.

EasyPrecision-the product name says it all

As it suits the purpose so well, the science team chose the original project title as the product name: EasyPrecision stands for highest precision and easy handling, what perfectly describes the essential properties of the invention. The novel measuring device is flexible, it can be integrated without any problem into manufacturing processes and it is easy to operate. It measures in the range of nanometres (one millionth of a millimetre) and is designed to measure both surface and function of aspheric lenses for the optic industries. This means that manufacturers of object lenses can use it in fields like prototype construction, product development, process optimization and manufacturing-related quality assurance management and thus test the shapes and properties of these optical components. A field of application for these components exists, for example, in laser processing systems. The method will have advantages over other developments, especially if the number of pieces is low or the test specimens display a high degree of variability.

The innovation managers at InnoWi saw the chances of the new measurement method early on and launched several patent applications in order to protect the invention. Industry's great interest in Bremen's development endorses this commitment. "Academic research in Germany has an extraordinary economic potential. Our task is to recognize this potential, make it accessible to the economy, and support the start-up of new businesses," says Dr. Lieselotte Riegger, InnoWi's General Manager.

Successful research and development is one thing. But founding a company and bringing a developed product on the market is something completely different. This is what the inventors and the new entrepreneurs Prof. Dr. Friedrich Fleischmann and Prof. Thomas Henning as well as the scientists Dr. Ufuk Ceyhan, Dipl.-Ing (FH) Matthias Eichmann and David Hilbig, M. Sc. have found out for themselves by now. The product may be so innovative and the input so high and motivated: they know that without external professional assistance and a support also from the university it would hardly have been possible to found a high-tech company as a research laboratory spin-off. For this reason, the EasyPrecision team relies on support from the university, the InnoWi, and Bremen's business start-up program BRUT. "In Bremen the possibilities for university spin-offs are excellent ", the researchers say.

Receiving support from the InnoWi, the founders submitted an application to the Federal Ministry of Economics and Technology for funds of the EXIST program and received a total of 518,000 euros for the research transfer project. In the meantime, others distinguished the researchers for their innovation; in October they won the competition of the "most promising junior entrepreneurs." In the CAMPUSideas competition organized by BRIDGE they came out on top rivalling against 42 submitted ideas and made first place. Also in October, they founded ePholution GmbH and obtained exclusive licenses. They also recruited their first employee. Testing the measuring device under production conditions at the site of a pilot customer is planned to take place in December.

From website, business plan und roadshow all the way to trade-fair appearance and recruitment of employees

The declared goal of the company is develop, manufacture and sell high-quality measuring devices. A manufacturing site for high-tech products is supposed to be built and established in Bremen and to create new jobs. ePholution GmbH already has its "Employee No. 1": graduate business manager Sebastian Jabs. With his expertise, the team will now continue to work on the company's business plan. Simultaneously, they permanently optimize their measuring system, attend to their internet appearance, company presentation materials and public relation activities, and are on the lookout for more employees.

The start-up plans its first roadshow to take place in the spring of 2014. Then the prototype will first be taken on a tour through Germany and presented to companies on site. Appearances at Hannover Messe, at the stand of Federal Ministry of Economics and Technology in the sector of "Young Innovative Companies", are to follow. After that, the measurement system will be presented to the public and hopefully inspire the media and potential customers. In May, it goes to the International Trade Fair Optatec held in Frankfurt. The company leasing its own premises and the expansion of its manufacturing facility are foreseen to take place in 2015.

"This is a nice piece of foundation history, which exemplarily reflects the capacities of our university," comments Prof. Uta Bohnebeck, Research Vice President at Bremen's University of Applied Sciences. This spin-off will hopefully spawn many imitators. We promote our students and researchers by helping them in the realization of their ideas. Our support already begins in teaching. Here, we rely on competent and dependable partners like the innovation managers at InnoWi. The success will then be revealed in projects like this one."