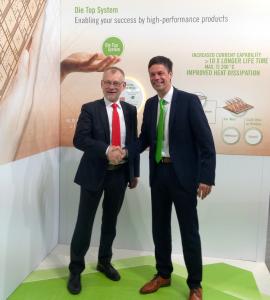 With its new design, the Die Top System not only increases the power module’s current carrying capability, it also boosts its power cycling capability by a factor of ten or more. This makes it possible to have junction temperatures of up to 200⁰C. A highly conductive copper foil is applied to the semiconductor chip using a sinter paste. This distributes the current evenly across the semiconductor chip, reducing heat and better balancing hot spots in the semiconductor. The foil also strengthens the chip during production for the power module. As a result, more efficient copper bonding wires can be used in place of traditional aluminum bonding wires.

"We worked with Danfoss to develop the Die Top System for applications that need to be highly reliable, such as offshore wind turbines and hybrid and electric vehicles," said Frank Stietz, president of Heraeus Electronics, remarking on the agreement. "As an example, thanks to this new technology, wind farm operators may raise their profitability significantly, since maintenance flights can be reduced by 90 per cent. Now other industrial sectors can also profit from these advantages."

Claus Petersen, CEO of Danfoss Silicon Power, was also enthusiastic about the cooperation agreement: "We developed Danfoss Bond Buffer® technology at Danfoss Silicon Power specifically for applications with high reliability and service life requirements. In particular, we use it for applications in the automotive and wind segments," he explained. The partnership with Heraeus and the marketing of the Die Top System will give everyone the opportunity to put this highly reliable, non-proprietary technology into use. "This will enable the necessary economies of scale for the broader market."

Heraeus, the technology group headquartered in Hanau, Germany, is a leading international family-owned company formed in 1851. With technical expertise, a focus on innovation, operational excellence, and an entrepreneurial leadership, we strive to continuously improve our business performance. We create high-quality solutions for our clients and strengthen their competitiveness in the long term by combining material expertise with technological know-how. Our ideas are focused on themes such as the environment, energy, health, mobility, and industrial applications. Our portfolio includes everything from components to coordinated material systems, and our products are used in a wide variety of industries, including the steel, electronics, chemical, automotive, and telecommunications industries. In fiscal year 2015, Heraeus earned product revenues of €1.9 billion and precious metals trading revenues of €12.9 billion.With around 12,600 employees worldwide in more than 100 subsidiaries in 38 countries, Heraeus holds a leading position in its global markets.