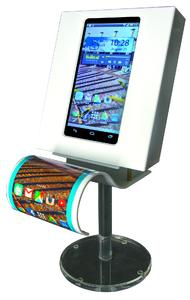 Electronic materials play a key role in touch panel technologies, such as new flexible touch technologies. Equally application know-how plays a vital part in the success of the new material to be used in device manufacture.

Together with ITRI, Taiwan, Heraeus, demonstrated the integration of Clevios™ conductive polymer based touch panel with AM OLED technology in a highly flexible device. The device was prepared using Clevios™ PEDOT conductive polymer material (formulated by EOC, Taiwan) patterned on ITRI’s FlexUp™ substrate. Solution processable and printable Clevios™ PEDOT: PSS is used as the transparent electrode in this device. In the project a 7 inch flexible Touch Panel / AM OLED device was produced.

Heraeus has been collaborating with ITRI since 2013. “In this latest development project with ITRI, we have produced a reliable, flexible, advanced touch panel and integrated it with an AM OLED display, opening up new possibilities in flexible, foldable and wearable technologies” says Dr. Stephan Kirchmeyer, Global Marketing Director for the Display & Semiconductor Business at Heraeus.  Dr. Janglin Chen, Vice President and General Director of ITRI’s Display Technology Center added,” The co-operation with Heraeus has shown the options for touch panel makers are broader than just metallic based ITO-alternatives.” Further projects with the ITRI Group and Heraeus in the application of displays are ongoing.

The touch sensor electrodes are based on a Clevios™ PEDOT. The experts at ITRI subsequently patterned the film using Heraeus invisible etch technology. A key element is flexibility which was tested 10,000 times at a bending radius of 5 mm.  The touch panel is laminated on the AM OLED display. The final product has 5 interactive functions within the display including touch controllable zoom in/out and rotation functions.

The Clevios™ PEDOT:PSS range from the Display & Semiconductor Business Unit of Heraeus consists of materials for antistatic through to highly conductive applications. Materials are modified for their application method, usually printing or coating, and for their end application requirements.  Typically Clevios™ coatings can reach 100 -250 Ohm/sq. at a transparency of 90% (excluding substrate film). Clevios™ is increasingly finding applications in touch panels and sensors, as well as OLEDs, organic solar cells and security coatings.

Industrial Technology Research Institute (ITRI) is one of the world’s leading technology R&D institutions aiming to innovate a better future for society. Founded in 1973, ITRI has played a vital role in transforming Taiwan's industries from labor-intensive into technology-oriented. ITRI focuses on the fields of Smart Living, Quality Health, and Sustainable Environment. Over the years, ITRI has cultivated more than 140 CEOs and incubated over 260 innovative companies, including well-known names such as UMC and TSMC. In addition to its headquarters in Taiwan, ITRI has branch offices in Silicon Valley, Tokyo, Berlin, Moscow and Eindhoven in an effort to extend its R&D scope and promote opportunities for international cooperation around the world. For more information, please visit http://www.itri.org/eng.