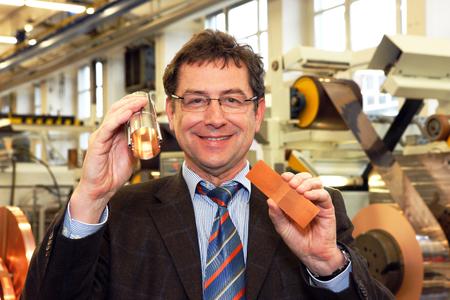 (PresseBox) ( Hanau, 12-07-19 )
The European Organization for Nuclear Research (CERN, Centre Européen du Recherche Nucléaire) in Switzerland conducts fundamental physics research. A key facility in this undertaking is the Large Hadron Collider (LHC), the world's largest and fastest particle accelerator, which is used by researchers to simulate the Big Bang, in addition to other projects. Physicists are causing a world-wide sensation with their experiments, as they have found proof of the so-called god particle (or Higgs boson). The researchers have been able to document traces of these particles in collider experiments. Higgs bosons are responsible for giving material mass and also are the basis for there being a universe at all. This discovery was made possible in part by high tech components from Heraeus. In 2005, during construction of the LHC, Heraeus Materials Technology specialists supplied about 70 tons of customized roll-plated ribbons with toothed profiles. The researchers used these in the technically sophisticated system to guide the particle beam in the acceleration, or "beam screen," tubes, which are only a few centimeters in diameter (the smallest measures 45.4 mm).

The discovery of the god particle just a few days ago was almost failed by a technical malfunction. Research operations were set to begin in 2008, but damage to the cooling system led to an extended shutdown of the facility after just a few days. The repairs took several months. It became clear to all involved that a repeated breakdown would lead to a yet longer standstill, as there were no further replacement parts available. As a result, Heraeus and other German, Austrian, and British firms were commissioned to produce the needed components for the acceleration tubes.

Explaining the demands of the task, Joachim-Franz Schmidt, Head of Production at Heraeus' rolling mill, says, "The manufacturing process for the acceleration tubes and the replacement parts is very time consuming, taking about two years in all." The production phase at Heraeus consisted of roll plating the ribbons and high-precision installation of toothed profiles in them, which took an additional four months to complete. This phase was completed at the end of 2011. The bands are now being formed into tubes in a series of special process steps.

"The roll plating of the ribbon is only one of the features that production at Heraeus provided," Schmidt says. He goes on to explain: "The saw tooth texture is achieved with rollers. While it would also be possible to stamp the texture into the band, the tool needed for this would be very complex to build, not to mention very expensive. The roller that's used instead is comparatively simple in structure and 'only' requires grinding with very small tolerances and extreme precision-but producing highly complex structures and forms is part of our daily work."

It's likely that this high tech material played a key role at the LHC in lifting the veil of one of the last secrets about the origins of the universe. The recently discovered Higgs boson, named after the Scottish physicist Peter Higgs, is purported to be the reason that there is a universe at all.

The Large Hadron Collider (LHC) is the largest and highest-energy particle accelerator in the world. Charged particles (protons and ions) are accelerated by very strong electrical fields almost to the speed of light and made to collide 100 meters below ground in the ringed tunnels of the LHC-with ten times the energy generated in previous facilities. For brief moments, particles are created which could also have been present at the beginning of the Big Bang. Highly sensitive detectors measure and analyze the radiation released as these particles decay. In the vacuum of the 27- kilometer-long beam screen tubes, at temperatures close to absolute zero, innumerable superconductive magnets guide the particles along the correct path.

The extreme conditions place special demands on the materials used in the production of the tubes. The roll-plated bands must maintain their special magnetic characteristics and mechanical stability even at -270°C, the operating temperature of the LHC. Heraeus gave the specially produced steel a copper coating of just a few micrometers thickness and, using a profile extrusion line, its saw-tooth texture. The saw teeth reflect the radiation that is set free in the particle collisions of the later experiments. Any deviation in the saw-tooth geometry could change the reflection angle and thus lead to incorrect measurements.

Heraeus, the precious metals and technology group headquartered in Hanau, Germany, is a global, private company with over 160 years of tradition. Our fields of competence include precious metals, materials and technologies; sensors; biomaterials and medical products, as well as dental products, quartz glass, and specialty light sources. With product revenues of €4.8 billion and precious metals trading revenues of €21.3 billion, as well as more than 13,300 employees in over 120 subsidiaries worldwide, Heraeus holds a leading position in its global markets.