Expertise in screening, washing and purifying will expand to include pelletising technology 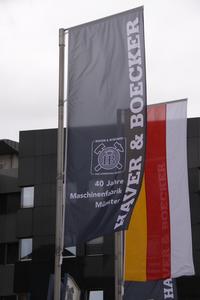 (PresseBox) ( Oelde, 09-09-04 )
In early September employees and their families in Muenster celebrated a Haver & Boecker Machinery Division anniversary - 40 years in Muenster. Its history started with the purchase of the J. A. Braun agricultural machinery plant by Haver & Boecker in Oelde in July 1969.

The new location in Muenster was a positive development for the Haver & Boecker Machinery Division in Oelde and it allowed them to increase production capacity and shorten delivery times. During the first two decades, primarily single parts and sub-assemblies for the HB production range were produced, and this contributed to a large increase in the sales turnover for the head office. In 1989, as space for the assembly of packing and screening machines had gotten too cramp in Oelde, screening machine production was moved to Muenster. In the early 1990s sales and design followed. Concentrating all mineral processing activities at this new location led to a great leap in innovation. Numerous innovations resulted in continuous growth for the screening machine product range.

New challenges arising at the Brazilian daughter company Haver & Boecker Latinoamericana located in resource-rich Brazil also led to important new developments. The takeover of TYLER in Canada in 1998 added further impetus to screening machine technology. Under the name THE SCREENING GROUP, all three locations now effectively meet the demands of the various markets. The screening machines that are globally marketed and built in Münster Monte Mor, Brazil and St. Catherines, Canada under the brand names of NIAGARA and TYCAN, for example high capacity screening machines for the Canadian oil sand industry, underscore the expertise of the SCREENING GROUP.

In early 2000, an additional process was developed for the wet screening of building minerals and materials that are heavily charged with clay and loam. This environmentally friendly and cost-effective washing process has since expanded beyond Europe and into the sectors of gravel and sand processing, and is now utilised in diamond and gold mines in South Africa.

Currently the screening machine division's business sector in Muenster and the area of pelletising technology is being expanded. Moreover, this technology, which up to now has been primarily used for processing iron ore, puts environmental protection at the forefront. Especially fine ore is processed into pellets on giant plates with a diameter of 7.5 m (24.6 ft.) and a capacity of 150 tons/hr. This technology can be used for other applications as well, e.g. for granulating fertilisers. The technology is being further pursued by working together with subsidiary company HAVER ENGINEERING Meißen, which develops process-engineering solutions and machines for agglomeration, pelletizing and washing machines for building materials and mineral goods. This will be prominently featured at bauma 2010 in Munich.

Original spare parts according to plan

Recommend Expertise in screening, washing and purifying will expand to include pelletising technology press release