Tenacity and genuine enthusiasm characterize her personality / Dancing is her passion 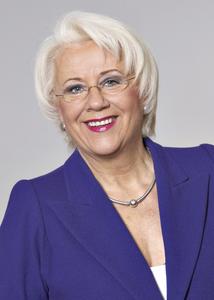 (PresseBox) ( Espelkamp, 15-02-02 )
Tenacity and genuine enthusiasm are among her character traits, while perfection is her key benchmark. "One must never give up in pushing oneself on to peak performance, time and time again - while always being prepared to keep learning," she states. On February 3, 2015, Margrit Harting, a strong willed and passionate entrepreneur with charm and esprit, a demanding and supporting manager of the municipality and the region, the arts and the cultural arena, as well as the creative head of the globally active technology group, will be celebrating her 70th birthday.

In 1964, on her high school graduation from the Königin-Mathilde-Gymnasium in Herford, she declares oceanographer as her career goal. But this was just an act of defiance, given that her father, who ran a private commercial school in Herford and Rahden, had long designated the third of his four children as his future successor. So the teenager had to warm to a somewhat unloved educational career. She never regretted her training as a qualified teacher of business studies, however, as this provided her with an essential foundation for her activities in the company today. Interacting and communicating with people is just as important to her today as it was back then in the early days.

Even after marrying Dietmar Harting (1971), a corporate career was "not an issue" for many years for the daughter of a teacher and a merchant, who was born in Schötmar, in the Lippe region. Following the death of her husband, Marie Harting managed the company HARTING that was founded in 1945 for a lengthy period of time together with her son Dietmar.

"At home too, the company always took center stage, and the talks around the table were my learning years," as the celebrated remembers. It was in 1987, following a severe illness of his mother, that Dietmar Harting brought his wife on board as a managing director of the company, which at the time had a workforce of just under 1,200 employees and generated sales of almost 150 million DM. Since 1996, Margrit Harting has been active as general partner.

The mother of two - son Philip Harting and daughter Maresa Harting-Hertz have been active as personally liable partners since the end of 2013 - rapidly found her calling. It was not long before her handwriting was clearly visible in all areas of the meantime global player. She is an inspiring, communicative and cosmopolitan mover and dramaturge, shaping and designing the presentation of the company both internally and externally: from the architecture (she was the driving force behind the significant "Botta building" in Minden), on to trade fair presentations, publicity, quality assurance and all the way through to the corporate philosophy and the corporate culture, as well as the company's own, state of the art "New Training Center HARTING" (NAZHA), that is setting top standards in the qualification of junior professionals. For a good quarter of a century the couple have jointly managed the innovative and dynamically growing technology group - on the one hand, the passionate technology lover and strategic visionary, and on the other, his wife with the "excellent touch for design, aesthetics and the courage to take the first step," as Dietmar Harting expresses his praise. "She is my most important corrective instance, driving force and cautioning voice. There would be a huge gap without her, a great deal would simply be missing."

This not only holds true for Espelkamp, the company's headquarters, where she passionately implemented and financially enabled the modernization of the "Neues Theater" together with her husband, but also applies to the Rahden and Minden locations, and the whole of the East-Westphalia-Lippe region (OWL). As Chairwoman of many years' standing of the Philharmonische Gesellschaft Ostwestfalen-Lippe, the Interessengemeinschaft Standortförderung Kreis Minden-Lübbecke (business promotion association for the Minden-Lippe district) and the Volksbildungswerkes Espelkamp (Adult Education Agency of Espelkamp; she is honorary Chairwoman of the latter organizations) she gives important and sustained impulses for the development and attractiveness of the region.

Tenacity and genuine enthusiasm are among her strengths. After getting to know Claus Peymann in 2006, she invited the legend of the theater to give a guest performance with the Berlin Ensemble. And Margrit Harting did not relent until the famed director actually appeared on stage in Espelkamp. And what is more, this was not to remain a unique showing.

Focused and full of élan, while pursuing perfection and elegance - that describes her leisure activities. Ever since her schooldays, the honorary citizen of Espelkamp, holder of the Federal Cross of Merit 1st Class, IHK Vice President and grandmother of eight, has been an avid dancer. Unfortunately, however, the joys of waltzes, foxtrot and more are the only things that Dietmar Harting (75) shares with his wife as a merely passive onlooker ("She is a real stroke of good luck for me").

When it comes to their shared passion for Scrabble, the two entrepreneurs are ambitiously pitting their wits and playing the board game out at eye level. After countless rounds, the total score, so one hears, remains balanced. This, in turn, aptly reflects the performance of both partners and their share in the success of the dynamically and continuously expanding corporation.

Connectivity+: Powerful connectivity of the future