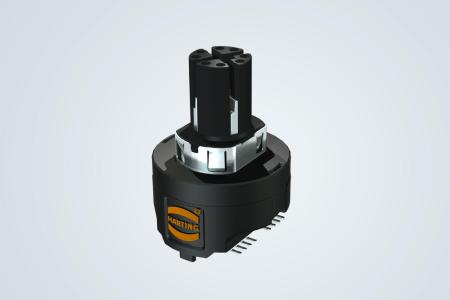 (PresseBox) ( Espelkamp, 16-09-21 )
HARTING Technology Group will use this year's InnoTrans (September 20-23, 2016 in Berlin), the world’s preeminent trade fair for the rail industry, to showcase its innovative new products for cabling slated to be used in rail transport in future. The spotlight will be on the new solutions “M12 with Magnetics” and “M12 PushPull” in the area of Ethernet connectivity, as well as the optical control of drive systems via “Active Optic Cabling”.

Introducing its new “M12 with Magnetics”, HARTING is presenting a world first for device manufacturers in railway engineering. To date, the M12 PCB connection and the transformer always required for Ethernet have been separate components arranged side by side. The new “M12 with Magnetics” combines these features in a new connector with no increase in size. This saves the space and the planning for the additional transformer on the circuit board, thereby saving money and offering device manufacturers completely new possibilities with regard to available space. Space savings of at least 30 percent speak for themselves and are fully in line with the miniaturisation trend in the rail sector.

Speed control on larger electric motors (traction control in trains, propulsion engines on ships or E-buses) is effected via IGBT semiconductors. Due to high insulation and voltage requirements, the signals used to control IGBTs are transmitted by way of plastic optical fiber (POF). Redundancy and the multiple fibers that are required mean that numerous optical contacts arise which were previously connected individually. This in turn results in significant time and effort for installation and service.

With “Active Optic Cabling”, HARTING presents a solution which employs optical transmission and electrical plugging to offer easier installation, time savings and trouble-free signal transmission. All optical contacts are bundled in a DIN 41612 housing and can be connected simultaneously. The zinc die-cast housing offers kink protection, strain relief and EMC protection, as well as the vibration resistance required in the rail sector. Smaller, faster and easier – the HARTING solution offers all three for rail transport.

HARTING has rounded out the M12 PushPull series just in time for the InnoTrans event. The new angled housings will be featured at the trade fair along with the new versions of the A, D and X-coding, which are now also available for the first time as a “female PushPull”. The tool-less system saves time and space during installation while also providing Ethernet up to 10Gb/s for train safety technology and entertainment systems. One click – and the secure connection is in place. “These highlights see HARTING stay abreast of the miniaturisation trend that’s gained momentum due to Industry 4.0, while designing future interfaces for intelligent connections,” emphasises Ralf Klein, Managing Director HARTING Electronics.

HARTING has increased the power density in the upper segment of its high-current connector series: the new Han® 34 HPR EasyCon now permits the use of four HC Modular 650A contacts in one connector. The housing is available in straight and angled design, making it optimally suitable as a motor connection and for use with jumper cables on rail vehicles. Alternatively, twelve Han-Modular® single modules can be used with the Han® 34 HPR hinged frame. This results in countless possible combinations for modular connectors with contact inserts from the Han-Modular® series.

This series offers over 50 different modules for the transmission of power, signals and data. Andreas Siegert, Product Manager at HARTING Electric, stresses that there are also more opportunities for new mounting frames: “Customised contact mounting frames can be developed which can accommodate Han® HC Modular high-current contacts in addition to Han-Modular® inserts. This enables the combination of power, signal and data modules in the robust Han® HPR housing with a current-carrying capacity of up to 650A instead of the previous maximum of 200A.”

HARTING will also use the InnoTrans event to demonstrate how digitisation, modularisation, miniaturisation and integration can be optimally implemented in the railway environment. By way of example, the HARTING MICA aggregates the communication content of an RFID system in a manner which enables the analysis and preparation of data, as well as data format conversions, both directly and locally. These data are then furnished to a central unit. The MICA, which was bestowed with the 2016 HERMES AWARD, makes it possible to quickly add new systems and functionalities to existing train infrastructures.

RFID is becoming an increasingly important key technology for the identification of objects, especially in the rail industry. RFID identifies which maintenance and repair measures have been performed on a component and which are still pending. Mileage-based maintenance and component replacement can be more cost-effectively performed. Among others, RFID-supported driver assistance systems enable the verification of door release, control railhead conditioning and allow the vehicle to precisely position itself on its tracks.

In the railway and Industry 4.0 areas, HARTING focuses on pioneering projects for the digitisation of processes in production, logistics and maintenance/servicing. As a solution provider, HARTING IT System Integration’s task is to factor in and address the requirements in these sectors, analyse existing processes and structures and optimise them in tandem with users. The adherence to established GS1 standards (as EPCglobal® ALE 1.1) is a central facet of the overall solution.

The HARTING Technology Group is a leading global provider of industrial connection technology for the three lifelines of Power, Signals and Data. The company has 13 production locations as well as business units in 43 countries. In addition, the company produces checkout systems for the retail sector, electromechanical actuators for automotive and industrial series production, as well as hardware and software for customers and applications in the areas of automation technology, robotics and transportation. In the 2014/15 business year, some 4200 employees generated sales of EUR 567 million.