Together with Sennheiser, HARTING Applied Technologies has developed production facilities deployed at the Sennheiser headquarters 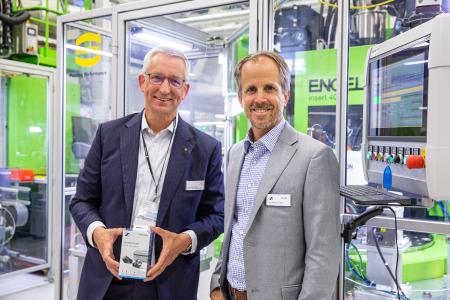 (PresseBox) ( Espelkamp / Wedemark, 19-07-09 )
The HARTING Technology Group in Espelkamp and the Sennheiser Group in Wedemark have a lot in common: the two family-run companies are global leaders in their field, they were founded in 1945 and they have both been the recipients of multiple awards for their innovativeness. Now, both medium-sized companies have entered a partnership project: in cooperation with Sennheiser, HARTING Applied Technologies has developed a production system for miniature converter components, the central element responsible for the sound quality, that has been put into operation by the two companies at the headquarters of the audio specialist in Wedemark near Hanover. The fabricated components are being used in premium headsets, e.g. the MOMENTUM True Wireless and in-ear monitoring headsets that are utilised in professional applications on stage.

HARTING Applied Technologies has developed two customised production machines for the Sennheiser Group, the leading manufacturer of headsets, loudspeakers, microphones and wireless transmission technology. One of the new machines produces the so-called chassis. Here, two contact strips are inserted into an injection moulding tool, where they are separated and bent, with the overmoulding process taking place in the next step. A second machine produces a magnet system consisting of two metal components, a magnet and plastic overmould. Both machines perform a 100% test on the components after the overmoulding process. Handling of the individual components and the finished parts is done by a robot. A magnet system and chassis are later assembled into a converter and this is used in the Sennheiser earphones.

“Working in close partnership with Sennheiser, we came up with the product structures and production concepts very early on in the design phase. At the time, the product was only an idea. Our new production concept enables the highly precise assembly of filigree Sennheiser components,” says Dr. Volker Franke, CEO of HARTING Applied Technologies. The partnership project underlines the “ability of HARTING Applied Technologies to provide flexible and customised solutions,” as Franke continued.

HARTING Applied Technologies is a renowned specialist in the area of special machine construction and tool-building. The subsidiary of the HARTING Technology Group is responsible for developing, designing and building assembly systems and special machines for cross-sector industries, e.g. furniture, electrical and automotive industries and medical technology. In addition to fully automated workpiece carrier and servo-based assembly systems, the focus is also on offering manually linked "one-piece-flow" line concepts and ergonomic single-position systems.

The tool construction department builds tools of any complexity and with maximum precision, primarily for internal injection moulding and aluminium pressure die-casting. A particular strength is the close interlinking of tool construction and special machine construction. “Combining these two areas is what made this project so successful,” emphasised Franke.

“The new machines are an important component of our system for the production of high-value miniature headset converters,” said Axel Schmidt, Director of Engineering at Sennheiser. “With this system, we are setting new standards in converter production, as it enables production in large quantities with consistent quality and maximum precision.” With the new machines, Sennheiser is continuing to invest in its production site at its headquarters in Wedemark.

Shaping the audio world of tomorrow and creating unique audio experiences for customers - that is the ambition that Sennheiser and its employees live by, day in, day out. Founded in 1945, family owned and managed Sennheiser is one of the world's leading manufacturers of headphones, loudspeakers, microphones and wireless transmission technology. Since 2013, Daniel Sennheiser and Dr. Andreas Sennheiser have been at the helm, and are the third generation of the family to run the company. In 2018, the Sennheiser Group generated revenues of EUR 710.7 million.