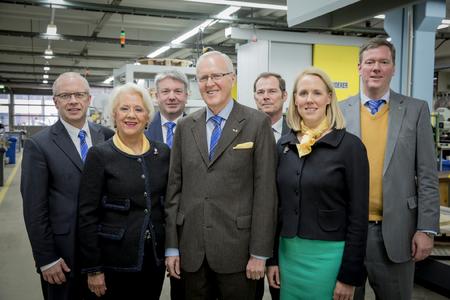 "This result is entirely in line with our expectations", remarked CEO Dietmar Harting at the press conference of the annual financial statements on December 6, 2013 in Espelkamp. Business performance varied in the individual regions in which the HARTING Technology Group operates.

Very positive results were achieved in the Asian region. Revenues here rose by 9.8 percent to € 90 million (previous year: € 82 million). Europe (excluding Germany), Middle East and Africa, the region EMEA, also showed revenue growth. Revenues climbed by 2.4 percent to € 174 million (previous year: € 170 million). In contrast, revenues in Germany contracted slightly, coming in at € 174 million (previous year: € 177 million). The Espelkamp-based family owned and managed company had an 8 percent decline in revenues to € 46 million in the Americas compared to € 50 million in the previous year. The HARTING Technology Group generated over two-thirds (64 per cent) of its revenues outside of Germany. "We will focus even more intensively on the Asia region and primarily China. We aim to achieve greater proximity to the growth markets and our key customers here. Consequently, we will also continue to invest in this region", said Philip F.W. Harting, Senior Vice President Connectivity & Networks.

HARTING once again substantiated its claim of being an innovative and research-driven company with systematic focus on customer orientation by developing and producing pioneering developments. HARTING unveiled its latest product innovations at the Hannover Messe trade fair and at the SPS IPC Drives exhibition in Nuremburg. The emphasis at both trade fairs was placed on the HARTING Technology Group's innovative solutions for "integrated industry". HARTING IT System Integration GmbH & Co. KG, which was newly founded in January 2013, highlighted at the exhibition that HARTING will focus more intensively on positioning itself as a full-range supplier in this field in future.

HARTING Systems further increased the number of successful installations and consequently further strengthened its position in the food retail business during the financial year under review. In addition to the absolute rise in sales figures for anti-theft vending systems, various new developments were successfully launched on the market for the first time. The assumption of the role of general contractor for the checkout zone in food retail business reduces the process costs of implementation for retailers, while at the same time adding value and increasing sales figures in the checkout zone. "This revolutionary innovation in the sector can be seen in the combination of various sections to form a full-range supplier offering while delivering optimized and yet specialized solutions", as Dietmar Harting underlined. HARTING Systems is taking over responsibility for the graphic visualization of the newly designed checkout zone, technical coordination between the individual parties and production and installation; all from a single source.

The HARTING Automotive business also performed extremely well in the year under review. Besides the successful actuators segment in the automotive supply sector (suspension systems and shifters) and its many proven customer solutions in the industrial sector, HARTING also successfully entered the e-mobility market with the Porsche Panamera. By developing a modular design for the global use of a mobile charging system with all country-specific vehicle charging plugs, HARTING Automotive has established another field of business.

Investments in the home region

Investment during the previous financial year focused on the construction of the "HARTING Quality and Technology Center (HQT)". An estimated € 10 million is being invested in the new building which is set to officially open in summer 2014 in Espelkamp. Research will be conducted into new technologies for future products and solutions at the technology center in Espelkamp which has a 60-strong workforce. All investments in the previous fiscal year amounted to around € 40 million.

The Technology Group is also looking to expand its capacities in Rahden. The company moved into a building in the "East" industrial park there in 2010. The company site is to be expanded by around 20 hectares for HARTING Electronics. Ten hectares will be required for the initial construction phase. The procedure to amend the regional plan is currently taking place at the Detmold district administration.

Good progress is also being made on the construction of the new logistics center. HARTING will occupy this new building during 2016. "Our aim is to supply our customers with top-quality products even faster," said Philip F.W. Harting. As a research-driven group company, HARTING has implemented these measures and made this investment to meet its uncompromising quality standards and to ensure systematic customer orientation.

"We also show end-consumers the benefits of our products and solutions in daily life. An impressive example is the new e-mobility-station in Espelkamp that was put into operation three days ago. The population of Espelkamp can quickly, easily and safely load up their e-cars with 'green' electricity. This way, HARTING, the council Espelkamp and the public utility Espelkamp make a key contribution for environmental protection and sustainability", said Philip F.W. Harting.

HARTING attaches great importance to climate protection and energy efficiency. The Technology Group has already clearly exceeded federal government's climate protection targets. These provide for a 40 percent reduction in CO2 emissions by 2020. Thirty-five per cent of electricity is also to be generated from renewable energies by 2020. HARTING's production has been CO2 neutral since 2012. All electricity has been generated by certified German hydropower since the beginning of this year. Every year, this prevents the release of CO2 emissions equating to 160 million kilometers travelled in a VW-Golf. Thanks to its own four cogeneration units and the upgrade of three such units at power-heat coupling plants, the Technology Group has improved energy efficiency by 20 percent while increasing revenues at the same time.

Process optimization in conjunction with corporate social responsibility (CSR) has played a major role at HARTING for many years. The Harting family has already focused on the economic, environmental and social aspects of its business activities at an early stage. These key elements of the corporate vision were already established in 1996. HARTING now holds various third-party certifications verifying its commitment to CSR, such as ISO 26000. "We want to create values for people by implementing green projects, while keeping the figures in the black. Environmental protection and sustainability are put into practice every day", Dietmar Harting pointed out.

The Espelkamp-based family company also announced positive numbers in terms of headcount - the number of employees (including apprentices) stood at 3,815 at the end of the financial year (previous year: 3,615). This means that the HARTING Technology Group has taken on 200 new employees worldwide within the course of a year. Of these 200 jobs, a total of 78 (plus 4.8 percent) were created abroad and

As of September 30, 2013, HARTING employed 2,102 (previous year: 1,980) staff (including apprentices) at the three locations in the Minden-Lübbecke region (Espelkamp, Rahden and Minden).

Training opportunities and qualifications for young HARTING staff were also further extended. Particular importance has traditionally been attached to apprentices at HARTING. The number of apprenticeships rose by around 12 percent, having already increased by around 15 per cent in the previous year. As of September 30, a total of 114 young people (11 more than in the previous year) received training in 17 careers at the NAZHA training center which opened in 2008. The HARTING Technology Group also intends to increase the number of apprenticeship places again this year, in fact by over 11 percent - taking the total to 127.

"We have increased the number of training places year after year. We are investing in our talented young employees because they are the future of the HARTING Technology Group. Against a backdrop of demographic change, we are deploying a whole range of marketing measures to attract young, well-qualified people to the company in a targeted way", remarked Dr. Michael Puetz, Senior Vice President Human Resources, Facilities and Legal Affairs at the HARTING Technology Group.

As part of the marketing of training opportunities, over 400 pupils from mainstream schools in the surrounding area attended information events at the company's new training center (NAZHA) during the last financial year .HARTING has enabled 60 young students to undertake two to three-week internships with the Espelkamp-based family company. "We are very proud, our apprentices always finish their apprenticeship with exceptional examination results", said Dr. Puetz.

HARTING's commitment to apprenticeship education and to employees in general is well-known across the region called "Mühlenkreis". The Technology Group has initiated a comprehensive health program for its employees. Also, continuous learning is an important part of the company culture. On top of that, HARTING supports primary school pupils by providing technical competitions and promotes young womens engagement in mathematics, engineering and natural sciences. "It's important for us to act in accordance with our vision "We want to create values for people", said Margrit Harting, Senior Vice President and Partner. "We represent our employer brand and build our actions on PEOPLE POWER PARTNERSHIP."