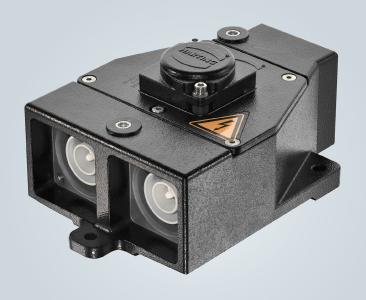 (PresseBox) ( Espelkamp / Hanover, 21-04-14 )
HARTING has developed new interfaces for the power supply of trains that are optimized for a long service life and thus stand for sustainability: The Han® HPR High Performance Transformer Connector (HPTC) is a transformer interface especially developed for railway customers and optimised for outdoor use. The HPTC pluggably connects the converter to the transformer. The new interface is available in the 400, 850 and 1400 A power classes, while voltages up to 3.6 kV/4.8 kV can be transmitted. IP degree of protection up to IP69K can also be implemented.

Key HPTC advantages: Previous solutions for transformer connection involve plastic outer casings, which can lead to low durability under the demanding and harsh conditions on the roof of rail vehicles. The HPTC, however, offers a completely pluggable solution enabling significantly longer service lives compared to plastic housings. This is also due to the robust housing, which is based on the proven HARTING High Pressure Railway (HPR) standard.

The Han® HPR VarioShell was specifically developed for jumper applications. The two-part enclosure achieves protection class IP69K by using a counterpressure frame, in connection with a circumferential internal seal. The enclosure cover is removable, allowing efficient assembly from both inside and outside the waggon. Plug-in connections for the wagon transition for trains are an appreciated feature in the housing and at the same time are easier to access. Input and efforts involved in operation, service and maintenance are significantly reduced. In the event of a fault, it is sufficient to open the housing cover, meaning that it is not necessary to interupt all connections.

To date, power distribution systems in underfloor areas have relied on UIC 552. The different interfaces of these systems each necessitate their own installation technology and must be stocked separately. Thanks to the Han® HPR Train Power Line (TPL) all this becomes a great deal easier: now, the is only one completely pre-assembled Y-distributor as standard interface as well as single poles for the pluggable connection of the cables. Consequently, the TPL becomes a uniform power supply across all wagons. What’s more, the result is also lighter than previous solutions: The difference in weight per wagon compared to previous solutions tips the scales at around 10 kg.

The HARTING Technology Group is a leading global supplier of industrial connectivity technology for the three lifelines "Data", "Signal" and "Power" with 14 production facilities and subsidiaries in 44 countries. The company also manufactures checkout zones for the retail trade, electromagnetic actuators for automotive and industrial series production, charging equipment for electric vehicles, as well as hardware and software for customers and applications in automation technology, mechanical and plant engineering, robotics and the transportation sector, among others. Around 5,500 employees generated a turnover of 759 million euros in 2019/20.