At HMI 2017, G&D will present their broad KVM portfolio for industrial control rooms 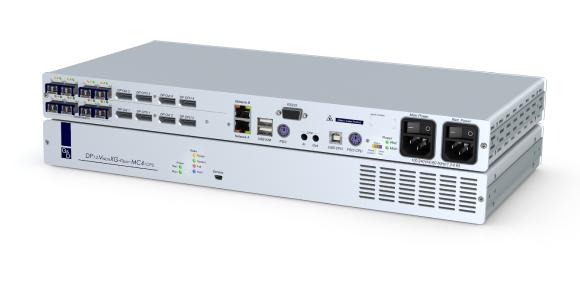 (PresseBox) ( Siegen, 17-04-11 )
From 24 April to 28 April 2017, at Hannover Messe, Hall 11, booth D56, G&D will showcase a range of KVM solutions especially designed for industrial applications such as process control stations or control rooms. KVM products enable the spatial separation between computers and operators. This way, computers can be moved into a separate equipment room from where they can be operated from a distance – in real-time, latency-free and without image losses.

KVM extender systems consist of a computer module and a user module and extend computer signals. The latency-free data transmission between computers and control rooms or operators is carried out over a dedicated connection via CAT cable or optical fibre. KVM extenders extend computer signals up to 140 m over CAT cables or up to 10,000 m over optical fibres. When transmitting via optical fibres, there is a galvanic isolation between the transmitter and the receiver module, which makes the devices insensitive to interference radiation. Due to their robust design, time and again, the systems have proven their worth in harsh industrial environments.

DP1.2-VisionXG – latency-free data transmission of high-resolution video up to 8K

A highlight on the G&D stand will be the presentation of the DP1.2-VisionXG, a powerful system that extends signals via fibre optics. It uses uncompressed data transmission and supports extremely high video resolutions up to 4K and 8K with a refresh rate of 60 Hz. The system includes many user-friendly and mission-critical features such as the screen-freeze function, the monitoring function, a redundant power supply, SNMP and two network ports. The screen-freeze function is a safety feature, which, in case of an issue, "freezes" the image last displayed on the monitor. This state is highlighted by a red semi-transparent frame. Meanwhile, the current time and the downtime of the video signal is displayed.

The continuous monitoring of the G&D device status ensures a long life cycle for the equipment. If defined states (for example ON / OFF) are changed or defined threshold values (for example, temperature) are exceeded, a corresponding documentation is generated in the web interface and the administrator can be notified via SNMP.

Industrial control rooms and process monitoring are characterized by a distributed and heterogeneous computer landscape. Often, several sources must be monitored at the same time. The use of a KVM matrix, e.g. the ControlCenter-Compact, improves the IT infrastructure and harmonizes spatially distributed installations, which can bridge distances up to 10,000m thanks to different transmission media (CAT or fibre). KVM matrix systems switch and distribute computer signals and are used whenever several computers have to be operated remotely via different, simultaneous workstations. The ControlCenter-Compact is available in six expansion levels providing between 8 and 80 dynamic ports and is compatible with both the DVICenter and the ControlCenter-Digital as well as all end devices, which makes it possible to add new systems to existing infrastructures. Special end components make it possible to operate multi-monitor workstations adding to the usability, as control room staff have to monitor several processes and programs running on different computers.

On the G&D stand at Hannover Messe, one of the highlights will be the ControlCenter-Compact with both its wide range of functions and its simple and intuitive operation. It features a range of mission-critical and user-friendly features, such as CrossDisplay-Switching, the push-get function and scenario switching to make the work of the control room staff as efficient as possible. The integrated CrossDisplay-Switching is extremely useful for multi-monitor workstations. Here, users are able to swicth between channels simply by moving the mouse. The mouse acts as if on a “virtual desktop” and can be moved seamlessly across the connected displays. When moving the cursor from the active to an inactive display, the keyboard-mouse focus automatically switches to the connected computer. This way, for users it feels like working on a virtual desktop.

The push-get function, which is available for all digital matrix switches, is also ideal for the cooperation of several operators in industrial control rooms. With the Push-Get function, users can move the screen contents of a target to (push) - or get it from - the display of another console. This display can be a large screen projection, for example. By using this function, operators can work together on solving issues..

Switching between day and night shift often also requires the operation and monitoring of different computer constellations. Scenario switching makes it possible to store predefined setups of switching conditions (e.g. day/night scenario). The selected switching states are saved in a script in the matrix system and can be accessed and executed via the OSD of workplaces assigned with the required rights.

The difference lies in the detail

In addition to simple, intuitive operation, G&D places particular emphasis on add-on products especially tailored to the industry. For example, the HK-Controller lets you use individual buttons or pushbuttons to transmit commands or shortcuts. Industrial-suited mounting sets for rack, table and rail mounting simplify the installation.

G&D have been dedicated to KVM for more than 30 years. At Hannover Messe, customers and interested parties will be able to discuss their individual IT solution with a team of KVM experts, 24 - 28 April, 2017 in Hall 11, Stand D56.