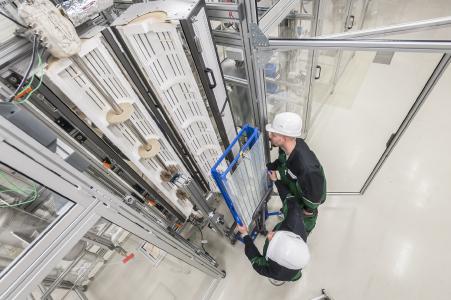 (PresseBox) ( Wilnsdorf, 16-08-10 )
With the ControlCenter-Compact, the German KVM manufacturer presents a compact version of the ControlCenter-Digital. The digital matrix system succeeds the well-known DVICenter series.

When G&D introduced the first digital matrix system, the DVICenter series, several years ago, DVI was the measure of all things. In the meantime, a number of signals has been added. Thanks to its other features and high reliability, the system has become extremely popular and is applied all around the world.

With the ControlCenter-Compact, a successor system is now waiting in the starting blocks. According to G&D’s philosophy, the system is completely compatible with the DVICenter and ControlCenter-Digital series as well as their components for the connection of computers and workplaces. There will also be more variants: The systems is available in five sizes from 16 up to 80 ports. All variants provide dynamic ports, which can be used either as input or output. For the first release, the ports are based on CAT cables. However, fiber systems and mixed variants will follow soon.

Another difference to the DVICenter is the performance of the new system. While the range for the actual signal transmission is identical, the system management provides more resources for an extensive database management. This especially meets the trend towards ever-increasing systems: For distributed installations, which interconnect many computers and workstations via cascade structures or using the KVM Matrix Grid™, the necessary database can be better managed. Just as is the case with the modular ControlCenter-Digital, the new name refers to the system’s performance class.

The ControlCenter-Compact includes the same functions as the other well-known G&D matrix systems. Of course, it also offers such popular features as the intuitive CrossDisplay-Switching, the Push-Get function for the optimal connection of video walls and the possibility of external system control.

Thanks to the system’s compatibility with other G&D components, Guntermann & Drunck GmbH once more demonstrates the long-term reliability of its installations. As usual, users benefit from the new system’s easy installation and operation. And since monitoring and SNMP are integrated as standard, the device is highly reliable for sophisticated tasks.

At IBC 2016, the new ControlCenter-Compact will be presented together with other novelties, which many visitors will be especially excited about. But that is all the company will reveal at the moment.

Um Anwendern mehr Freiheit zu geben und mehr Reparaturmöglichkeiten für Hardware zu eröffnen, wurde DIN SPEC 3105 geschrieben. Das Ziel: Hardware-Baupläne und andere Informationen sollen kostenlos ins Web – genau wie die Norm selbst. read more
The publisher indicated in each case is solely responsible for the press releases above, the event or job offer displayed, and the image and sound material used (see company info when clicking on image/message title or company info right column). As a rule, the publisher is also the author of the press releases and the attached image, sound and information material.
The use of information published here for personal information and editorial processing is generally free of charge. Please clarify any copyright issues with the stated publisher before further use. In the event of publication, please send a specimen copy to service@pressebox.de.