G&D for the first time at Hannover Messe 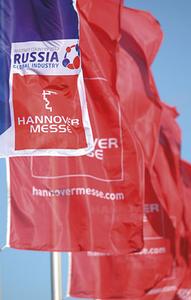 (PresseBox) ( Wilnsdorf, 14-03-18 )
Five days, five million contacts, 1,500 talks - many reasons why Hannover Messe is regarded as the world's most important industrial fair. It is a meeting place for leading companies from industrial automation, energy engineering, industrial subcontracting and research and development. Following the lead theme "Integrated Industry - NEXT STEPS", Guntermann & Drunck (G&D) will present the next steps towards the future of KVM.

"Up to this point the IT systems of each company speak their own language. However, with the new networks the industrial sector must agree on a common 'international language of manufacturing'," states Jochen Koeckler, Board Member of Deutsche Messe AG.

A trend Guntermann & Drunck are and always have been committed to since they entered the IT world almost 30 years ago. The KVM equipment of the German manufacturer is especially designed for the environments that are about to benefit from its application. Here, the focus is always on users, because employees are the most valuable assets of a company. That's why G&D KVM solutions primarily aim at improving the working conditions of people and secondly these of the IT equipment in use. They provide numerous additional functions especially directed at the requirements of fields like industrial process control and control rooms. "Operating and monitoring processes in control rooms requires fast reactions. The interaction between humans and machines has to run smoothly and has to relieve the staff instead of adding to the work load. These are the main aspects we always keep in mind when designing our products.", says Roland Ollek, CEO at Guntermann & Drunck GmbH.

KVM in industrial process control Control rooms demand reliable computers that are always available. Running and monitoring many processes requires many computers. Control rooms apply professional leading-edge IT solutions. However, most of the time rather than being IT experts, users are specialists in the fields they work in, monitor and in which they have to carry out corrective actions, if necessary. That's why it was easy for G&D to define the comprehensive requirements for their KVM systems:

KVM equipment lets users operate multiple computers from one or multiple workstations although they do not share a room. G&D's portfolio includes KVM extenders to bridge distances up to 40,000 meters between users and computers. These systems support 4k resolutions as well. Now, remote access and administration can be carried out even more flexibly. KVM switches let users easily switch between computers. They also benefit from a clean desk with only one set of keyboard, monitor and mouse. Whenever many users need to access many computers, a KVM matrix comes into play. A matrix lets them focus on their tasks instead of having to share their workplaces with several computers including fan noise and other emissions. In addition, G&D's portfolio offers various other ways to operate and monitor systems by combining KVM extenders, switches, matrix switches, consoles and accessories like rack mount sets.

Switching without having to think

Despite many displays, the control room staff must be able to keep an overview. Thanks to G&D's CrossDisplay-Switching, users can use the mouse to switch between the different computers connected to a KVM switch or KVM matrix switch. The mouse acts as if on a "virtual desktop" and can be moved to all connected displays. Thus, the mouse becomes an effective and fast switching tool. And the display order does not even play a role. Even large screens can be integrated and accessed like this; with an almost unlimited number of screens in an arbitrary order.

Use your chance to get more information about your individual application. Guntermann & Drunck look forward to meeting you in hall 11 (stand F53) at Hannover Messe, 7 - 11 April 2014. For more information, go to http://www.gdsys.de/