Born at the BVE: DVICenter

Last year, Guntermann & Drunck introduced its new KVM matrix "DVICenter DP32" to the audience at BVE / The industry asked for different sizes of this product / In 2012, the idea has already taken shape 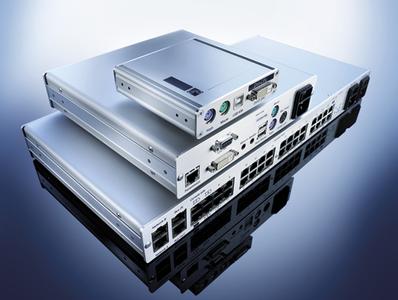 (PresseBox) ( Wilnsdorf, 12-02-02 )
The DVICenter from Guntermann & Drunck is designed to optimise the studio workflow - and declutter the workspace in studios or OB vans. The KVM DVI matrix switch permits multiple users, each equipped only with keyboard, mouse and display, to simultaneously access a series of computers that can even use different platforms. The new 16-port version is especially designed for smaller applications like in OB vans. The "big brother" holds 64 ports.

Implemented extender functions help save space in studios - because computers can now be placed into a dedicated server room, freeing up space on the desk. Thus, the generated heat and noise leaves the studio along with the computers. By creating such a convenient and less distracting studio environment, people can concentrate on the big picture.

Even for the maintenance staff the DVICenter comes as a relief, because they are no longer considered as "distracting". The technicians configure and look after the connected computers without disturbing studio or post-production operatives. Now devices can be deployed 24/7 while the staff remains concentrated and undisturbed.

With the DVICenter, DVI signals can finally be processed by a matrix switch. KVM - keyboard, video, mouse - broadcast solutions provide DVI resolutions of 1920 x 1200 @ 60 Hz and also transmit USB 2.0, RS232 and audio signals. Distances of up to 560 m over CAT cable are bridged without any loss of quality. Transmission via optical fibres is also supported extending the system range over 10,000 meters, which is vital for the deployment in buildings with vertical fiber-based cabling.

The 64, 32 or 16 dynamic ports can be easily configured for either connecting a user console or a computer module. Thanks to this flexibility for future tasks, the matrix switch becomes a safe investment. The DVICenter can be expanded on both the computer and the user side while software upgrades enhance its functional range. All configurations are carried out easily in an intuitive web interface or by OSD.

Redundant power supplies, pro-active monitoring of the device status by web interface or SNMP and the support of external directory services like LDAP or Active Directory are only some of the safety features that support the use in mission-critical environments such as live broadcasts.

The DVICenter variants and more of G&D's broad KVM product range are shown at BVE 2012 at stand C10. Guntermann & Drunck and their UK sales partner Omnio Technologies look forward to meeting industry professionals to give them a first hand impression of the efficient DVI range.

The Guntermann & Drunck GmbH was founded in 1985 and is now established as a leading manufacturer of digital and analogue KVM solutions. With its products the German company serves customers from small to medium-sized companies up to worldwide acting concerns of all branches.

Core competencies like development, production, sales and service are available in-house. That gives the owner-managed company the flexibility to make decisions closely to the market and in the interest of the customers.

G&D assures high quality, customer-oriented individual expert advice from planning over initial operation up to support. Only the perfect interaction of all components achieves the individual requirements of all different application scenarios.

With KVM Extenders the possible distance between computer and user can be extended up to 10,000 m. Signal transmission is carried out over existing cable infrastructure. With KVM Switches and Matrixswitches many computers are operated and administrated over one or several workplaces while saving in peripherals. All solutions hold the common advantage: high performance, latency- and loss-free access from the workplace to the computer. G&D's IP solutions extend the range of use and enable computer access even over Ethernet down to the BIOS level.

More product groups add to the portfolio and make comprehensive competence in solution.