Going strong for more than 20 years: With top service into the glass production of tomorrow 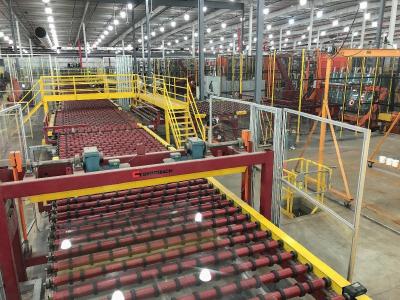 (PresseBox) ( Asbach-Bäumenheim, 20-07-23 )
At Cardinal FG's float glass plant in Mooresville, North Carolina, Grenzebach has upgraded the drive technology to the latest state of the art, ensuring that the plant will continue to perform well into the future. The original Grenzebach plant went into operation more than 20 years ago and after numerous upgrades still shows highest availability in its second life cycle. Service with clear added value and strategic demand - this is how Grenzebach accompanies Cardinal on its way to the glass production of tomorrow.

Manufacture glass elements for residential buildings at the highest level: This is the core of the Cardinal Group's business. From the float glass line at the Mooresville plant near Charlotte, NC in the US, 695 tons of flat glass are produced daily, which is then processed into insulating, laminated or coated glass at other Cardinal locations. Jim Stevens, Plant Manager Cardinal FG Mooresville, explains: "Here in Mooresville we are responsible for the production of float glass to supply the other Cardinal sites with raw glass from 1.8 to 5.7 mm thick. High performance and availability of the float glass line are of central importance for the entire group of companies. We have had excellent experience with Grenzebach's technology and strong services for more than 20 years".

For Jim Stevens and his team, it was therefore clear that they would also rely on Grenzebach for the recently upcoming upgrade on one of the plant side-legs. In total, the Mooresville plant consists of one main line, three automatic and seven manual side legs. The three automatic side legs have a total of eight stacking options. The cut flat glass is stacked on racks by direct stackers, swing arm stackers and robots. Each manual side line has one stacking station. The conveyor system must therefore control a total of 15 different stacking destinations. This is a complex system that offers a great deal of flexibility in glass production and is constantly being upgraded to the latest state of the art.

For the automatic side leg 3, Grenzebach's experts recently upgraded the drive controllers and axis. Background: The previous drive technology Siemens Masterdrive has been discontinued, the technology will no longer be available on the market from mid-2020, spare parts will be difficult to obtain. "Grenzebach approached us and suggested that we switch side leg 3 to Sinamics at an early stage. The rest of the line was already running with this drive technology. Being attentive to our needs and proactively suggesting upgrades is one of the reasons why we appreciate working with Grenzebach," says Stephen W. Joyce, Electrical Engineer at Cardinal FG Mooresville. The early modernization and standardization of the technology brings Cardinal benefits non-stop: reliable and trouble-free operation of the plant; the installed parts are standardized, only need to be stocked in small quantities - and access to the relevant parts is possible at any time on the market. "I have been working closely and in partnership with Stephen W. Joyce and his team for years. It is important to me to offer intensive sparring so that we can create tangible and quantifiable added value with the service. Of course, our work also benefits from the fact that we know the Mooresville facility in every detail," explains Martin Wagner, Service Manager at Grenzebach.

Upgrade and conversion in the control cabinets

During the rebuild phase, the side-leg with its four stacking destinations was taken out of operation - but during this time the company was able to run the full production range with the remaining eleven stacking destinations. Upgrade and rebuild took place mainly in the control cabinets, with four Grenzebach experts for software and electronics on site. "The cooperation was very straightforward. It was definitely worthwhile to standardize on Sinamics at an early stage," emphasizes Stephen W. Joyce.

In continuous operation since 1999

Cardinal and Grenzebach have thus jointly continued the series of successful upgrades. Grenzebach's Cold End system went into operation in 1999 and has since been expanded, converted and modernized to new technologies many times. The cutting technology, the heart of the Cold End, has been upgraded several times - for example with additional longitudinal and cross cutting bridges. These modernizations reduce opex costs and help to strengthen the competitive position.

Cardinal and Grenzebach set a joint milestone in 2015 with the cold repair of the float glass plant. The furnace was replaced and production paused for the period of modernization: within a tight schedule, extensive work took place at the Cold End, including two side leg upgrades with two new direct drive stackers each, seven manual spur line upgrades including PLC and an update of line control software PPC. Martin Wagner from Grenzebach comments: "The plant is thus already in its second product life cycle. It is very fulfilling to be able to support a production line that is working to full capacity around the clock for such a long time". For Jim Stevens of Cardinal, anticipatory service and ongoing upgrades are a contribution to value retention and thus to the sustainable use of capital that cannot be overestimated. "Always working with the latest technology enables us to supply our other plants with the highest quality flat glass - and to exceed our customers' expectations time and again.

Intensive support for a pacesetter in the industry

A total of 7,000 employees of Cardinal Glass Industries produce and process flat glass at 37 production sites in the USA for industries that manufacture windows and doors, especially for the home. Research and development is of particular importance to the company, in order to continually set new standards in the field of window glass, for example. A pacesetter in the industry. A total of five float glass production plants are in operation - all equipped with Grenzebach equipment - at the Portage, Menominie, Winlock, Durant and Mooresville sites.

Now back to Mooresville, North Carolina: Cardinal's technological innovations include the implementation of the Float Scan Edge digital (FSE-d) upgrade, which Grenzebach realized with Cardinal in spring 2019. The inspection system, which is located directly in front of the cutting technology, was equipped with a completely new interior. The system provides fundamentally important information for the individual, optimized cutting of the glass ribbon. The latest digital cameras, which more than doubled the detection width compared to earlier models, were installed in the previous housing, and the temperature range of the system was significantly extended. In addition, the new system has automatic brightness tracking to further minimize maintenance cycles. Data can now be communicated over all distances. With the help of the retrofit solution, the cutting technology can be adjusted even more precisely so that a larger part of the available glass ribbon can be used. The update could be implemented and realized without interrupting production - a specialty of the Grenzebach service experts. For recurring work, maintenance staff now experience a significant relief thanks to new assistance systems. Cardinal was an early adopter here - Grenzebach had presented the innovation to the international experts for the first time at glasstec 2018.

Keyword pioneer: Cardinal has been working closely with Grenzebach on the digitization of float glass plants since 2015. Together, software solutions have been developed and tested in production. A previous version of the IIoT platform SERICY developed by Grenzebach is in use in Mooresville. This software is used to collect important data from the Cold End and use it to optimize float glass production. The platform is also an interface for data from the hot end and the Cold End. Now, data from the FSE-d is also flowing into it. The supplied information can be used directly for production optimization and reporting. In cutting technology, this enables: higher yield, higher quality, simpler processes, further networking and more data security. "Cardinal is taking a bold step forward on the road to digital glass production - it is of enormous mutual benefit how we can support this with our expertise and innovative approaches," notes Martin Wagner von Grenzebach.

In the future, data evaluation via SERICY will also include information from the annealing lehr supplied by CNUD EFCO GFT for the Mooresville plant. CNUD EFCO GFT is now part of the Grenzebach Group - integrated competences from hot end and Cold End and integrated service; these are advantages from the bundled strengths that also benefit Cardinal.

The intensive, cooperative partnership between Cardinal and Grenzebach is rounded off by a 24/7 service, which the glass producer has been using continuously since 2015. Jim Stevens, Plant Manager, says: "In order to keep the availability of our production line in Mooresville as high as possible and to be able to clarify even detailed questions as quickly as possible, the 24/7 hotline is worth its weight in gold."

Work and troubleshooting is greatly simplified by the 24/7 service contract, system downtimes are further minimized. Cardinal Mooresville also supports a Line-Syn recorder which enables any errors that occur to be analyzed and rectified. This tool can also be used to optimize production, clarifies Stephen W. Joyce.

The service contract includes two annual service visits, individually tailored to the customer's needs, to support the customer in solving current issues or to carry out preventive maintenance on complex system components and to train the Cardinal maintenance team. Martin Wagner sees this as a decisive factor in the very low downtimes of individual redundant areas. Damage can be detected and repaired at an early stage and proper maintenance can be ensured.

To continuously expand the service for the international glass world is a strategic concern at Grenzebach. One of numerous initiatives is the deployment of product management and core teams. Martin Wagner, who has been supporting Cardinal as Service Manager for many years, is now able to propose forward-looking optimizations in a team with other experienced colleagues. From specialists in mechanical design to hardware and software specialists to process engineering in coating: the core teams are each interdisciplinary, and the diverse experience, special perspectives and bundled know-how benefit customers individually. The world of glass production is spinning ever faster. It is therefore important to Grenzebach to provide competent and close service support.

Grenzebach is a leading automatization solution provider for the global glass, building material and intralogistics market. In addition, the company develops new application areas, such as Friction Stir Welding, the automatization of industrial additive manufacturing and digital networking. The digitization platform SERICY allows customers to develop their own future-proof digital know-how. Grenzebach ranks among the international technology leaders in its markets. The global manufacturing footprint with production sites in Germany, Romania, the US and China, as well as additional worldwide locations ensure customer support on-site. More than 3,000 systems installed in more than 55 countries stand for quality and reliability. Since the company opened its doors 60 years ago, it has been owned by the founding family. With an export ratio of more than 90 percent, Grenzebach is a global player.

Recommend Going strong for more than 20 years: With top service into the glass production of tomorrow press release