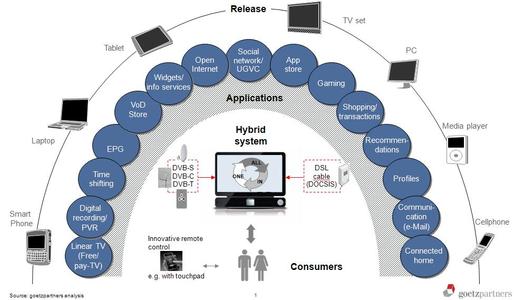 (PresseBox) ( Munich, 11-01-03 )
The days when living rooms accommodated a host of different media equipment will soon be over: according to a representative survey conducted by goetzpartners in Germany, half of all consumers would like to have a multimedia center for the living room that is a genuine jack-of-all-trades. This has already become reality in technical terms as a result of the growing convergence between TV and Internet. Various media equipment items already offer the potential to become home control centers. goetzpartners ascribes the best prospects to the hybrid television set that practically every second German household will own by 2015.

The ideal all-in-one system should provide the type of uncomplicated TV experience with which we were familiar 30 years ago, and which users can easily share with friends via social networks, for example. This is the conclusion drawn from a representative survey of the German population, which goetzpartners conducted among the 14-69 age group on the topic of the television of the future. The ability to use such a system tops the wishlist of the individuals surveyed.

Consumers have acquired a taste for such systems as a result of new technical possibilities: the multimedia station has become an ever approaching reality since hybrid TV sets are rapidly bringing about a convergence of Internet and classic television. The survey suggests that an all-in-one system must satisfy the following requirements before finding its way into people's living rooms:

1. Viewing and understanding: The user interface is the most important success factor.

Consumers will be easily won over if the visual portal is structured so that it is self-explanatory to the user, and particularly if it also offers a "wow" effect.

2. Easy to use: The remote control is the second most important success factor. Only one remote control unit controls all aspects of the multimedia center. Consequently, it should also be structured as simply as possible. "Models with a hundred buttons are a thing of the past," notes Susanne Kindler, manager and media expert at goetzpartners.

3. Easy to connect: Connecting the system (via the return Internet channel) must also be selfexplanatory.

Broadband access is required to allow the multimedia center to download data from the Internet. All-in-one systems will only be successful if they can be connected via wireless networks.

4. Always up-to-date: Since technology will continue to experience rapid growth, all-in-one systems that can be updated through regular synchronization, and be equipped with the latest applications, will also enjoy the greatest chance of success.

The most promising products

1. Hybrid television sets with integrated Internet connection - various applications are already running on some of these, and they provide access to video-on-demand.

2. Hybrid set-top boxes - they are particularly flexible since users can load multimedia content without having to switch television system.

3. Return-channel play consoles - these offer high processing powers, and are already in use in around 3.6 million households.

In 2009, around 3.1 million next-generation play consoles still dominated the market for return-channel systems, followed by almost 1.1 million IPTV set-top boxes, 500,000 hybrid set-top boxes, and 550,000 hybrid TV sets. But hybrid TV sets are already catching up rapidly. Around 2 million sets will have been sold by the end of 2010, four times as many than in 2009, according to the Bitkom sector association. This will mean that one in every five flatscreen TVs sold will already be Internet-capable.

goetzpartners expects that, for the first time, more hybrid TV sets than set-top boxes will be in use by the end of 2013. For the first time, sales of hybrid set-top boxes will then outstrip those of IPTV set-top boxes from 2014 onwards, according to these estimates. When hybrid systems finally dominate the market in 2015, goetzpartners expects that this will translate as some 17.6 million devices, accounting for more than 50% of all return-channel systems. "Hybrid systems will revolutionize the living room in the medium term," as Dr. Alexander Henschel, the managing director at goetzpartners who was responsible for the study, is convinced.

All-in-one systems not only entail changes for the equipment manufacturers sector, but also open up new revenue channels for many service and content providers. For example, if television viewers could purchase a live concert online at the click of a button without having to first boot their computers, or play games on their TV sets without having to first buy a play console, many applications, ranging from gaming to shopping or video-on-demand, would achieve mass-market breakthrough. "Manufacturers that successfully integrate all interactive applications intelligently within one system will be far ahead of their competitors," comments Susanne Kindler.

On a longer-term view, the all-in-one system will increasingly outsource its processing capacity to the Internet. It will draw its performance and data from the Cloud, and outsource its intelligence to servers. Proprietary end systems - which will have been decisive up to that point as closed systems - will then start to lose their significance.