Young people in Berlin, families with children in Baden-Württemberg and senior citizens in Saarland 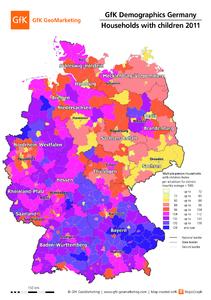 (PresseBox) ( Nuremberg, 12-01-17 )
In the federal state of Berlin, the proportion of singles as well as that of young people is the highest in Germany. Baden-Württemberg has the greatest number of families with children. The highest share of top earners is found in Bavaria, and Saarland has the 1-2 family houses in percentage terms. These are the findings of the latest GfK Demographics study for Germany.

In 2011, the proportion of single-person households in Germany amounted to 39.6% and was thus virtually unchanged on the previous year. As in 2010, the urban district of Regensburg came top of the table at district level with 57% - well ahead of the next urban district, Berlin, which recorded 53.7%. However, at federal state level, Berlin continues to be in the lead, ahead of the city states of Hamburg and Bremen at 50.3% and 48.6% respectively. The proportion of single-person households is lowest in Rhineland-Palatinate, where they account for 35.4% of all households.

This highlights that the German society is currently undergoing demographic changes. The share of families with children is decreasing while the average age of the population is rising. The survey also illustrates some redistribution effects. The share of older people is increasing in rural regions, whereas the proportion of family households is on the up in conurbations.

As in the previous years, the highest share of young households was recorded in the city state of Berlin, where a total of 15.7% of all households fall into this category - this is almost 36% higher than the national average in Germany.

Income structure: Bavaria has the most top earners

The GfK Demographics study also analyzes the socio-economic status of all households in a particular region. Households are grouped into seven income brackets according to the amount of monthly disposable income.

At federal state level, the proportion of households with a monthly net income of less than EUR 1,100 is the highest in Berlin. A total of 24.7% of all households there fall into this income bracket. This percentage is almost 75% higher than the national average for Germany. The lowest share of low-income households was recorded in Baden-Württemberg with 9.8%. In terms of high earners with a net income in excess of EUR 7,500, Baden-Württemberg has a share of 4.5%, putting it in third place after Hesse with 5.3% and Bavaria with 4.7%.

Housing structure: Saarland has an above-average number of 1-2 family houses

In terms of the housing structure, there are also significant regional differences throughout Germany. In Berlin, the share of 1-2 family houses is as low as 55.2%. This is a good 33% below the nationwide average for Germany. In Saarland, on the other hand, the share is almost 9% above average and this accommodation type constitutes 90.3% of all buildings in the federal state of Saarland. At regional level, the comparison varies even more markedly, as is to be expected. In the Dingolfing-Landau rural district, 96.7% of buildings are 1-2 family houses, whereas such buildings account for only 47% in the urban district of Gelsenkirchen.

With regard to high-rise buildings with 20 or more parties, Berlin again leads the way. Overall, 6% of the building stock in the German capital falls into this category. In second place with a considerable gap to the leader is Hamburg with a share of 1.5%. In the other federal states, the percentage ranges from 0.2% to 0.6%. The situation is similar for buildings with seven to 19 parties. Here, too, Berlin is in the undisputed lead with a share of 23.9%. Hamburg ranks in second place again with a 17.2% share. With less than 2.0% of all residential buildings in this category, Saarland brings up the rear. Buildings with between 3 and 6 parties account for a share of 16.6% in Saxony, which is ahead of Bremen at 15.7%. In last place in this category is Schleswig-Holstein with a share of 7.6%.

The study GfK Demographics encompasses socio-demographic data at various regional levels. The data describes the population and households in Germany in terms of household structure (single- and multiple-person with or without children, immigrant households, etc), age structure (age of household head) and income level (divided into seven brackets. In addition, data on the accommodation type is also available (e.g., 1-2-family houses, etc.).

NB: The 2011 study also encompasses new data from wage/salary and income statistics. This results in significant changes in terms of category shares in some federal states. The changes make it difficult to draw comparisons over time and also alter the top 10 ranking.

The GfK Demographics study is used by companies in their sales and marketing for target group localization. For example, the data provides details about where advertising specific products will be profitable.

The GfK Demographics 2011 study is available for all German urban and rural districts, every municipality and postcode area as well as at street level for a total of 2.6 million street sections and can be purchased from GfK GeoMarketing.

GfK GeoMarketing is headquartered in Bruchsal. It is part of GfK, one of the world's largest research companies. 11,000 GfK experts are working to discover new insights about the way people live, think and shop, in over 100 markets, every day. GfK is constantly innovating to use the latest technologies and the smartest methodologies to give its clients the clearest understanding of the most important people in the world: their customers. In 2010, GfK's sales amounted to EUR 1.29 billion.

Germany: Consumer climate stable at the start of summer