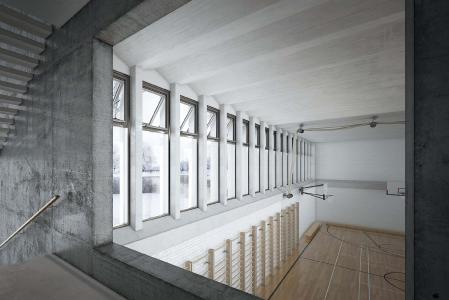 
Whether in public buildings, office buildings or schools – energy-efficient ventilation, a healthy indoor climate and monitoring the window statuses are central demands for large projects. Networked solutions from GEZE fulfil them: a 'climate active' facade is created as the result of the intelligent interplay between window drives and sensors which record external environmental influences and the indoor climate. Automatic windows are an ideal solution for automatic natural night-time back cooling. Automatic windows can be monitored and operated intelligently via IQ box KNX interface module, integrated into the KNX communication standard. The module has won the Silver PROTECTOR Award.

are then displayed on a central visualisation, and controlled and checked from there. Thus automated, the windows allow direct communication with other components in the KNX building system, such as KNX push buttons and KNX sensors. In this way, all windows in a building can be closed centrally at the push of a button. If a KNX weather station or a KNX air quality sensor reports rainfall, wind, a concentration of CO2 which is too high, or a temperature difference, the window drives will receive the signal to close or open via the IQ box KNX. Via precise activation of the window drives, the module enables energy saving potential and offers additional safety: in contrast to simple switch contacts, it uses the 'intelligence' of the window drives and after performing a 'command', reports the status of a window to the KNX building system or building management system. Additional window information is also provided by the IQ box KNX, e.g. the precise opening width, any faults, or the number of opening and closing cycles.

The window drives from the IQ windowdrives series can be connected to the KNX building bus unit via the new IQ box KNX interface module, for a perfectly energy-efficient indoor climate through controlled natural ventilation. Additional components – such as heating or air-conditioning – can also be integrated via KNX actuators. KNX air quality sensors and KNX weather stations supply the information on room air quality and external environmental conditions, thereby ensuring that there is no 'thick air'.

The Slimchain and Powerchain chain drives can be flexibly used. The Slimchain is the slim all-rounder. For instance, it can be used very easily for automating parallel-opening vent windows, supporting an efficient exchange of air with a facade view which is always consistent. The Powerchain is the power package for large and heavy facade windows, roof windows and light domes. The drives differentiate between alarm (RWA) and ventilation mode, i.e. a fast and maximum or a slow, limited and virtually noiseless opening. The adjustable drive stroke and the opening speed which can be individually adapted enable use on RWA and ventilation windows of various closing forces and with different opening requirements. If an 'RWA event' occurs, the drives can attain very large opening widths in under 60 seconds. The integrated, intelligent control allows drives to be combined easily. The control unit ensures the sequential and safe opening and closing of the windows, as well as the synchronisation of up to three drives.