The new pinch valves from GEMÜ make your tubes smile

With the new Q series, GEMÜ is expanding its wide range of valves to include pinch valves 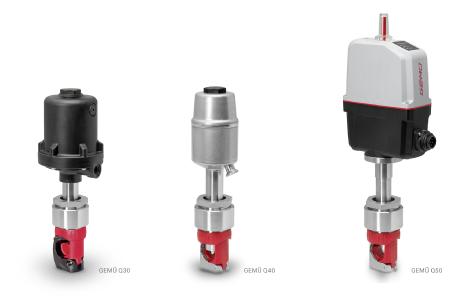 (PresseBox) ( Ingelfingen-Criesbach, 21-06-18 )
This series includes the GEMÜ Q50 eSyStep, a motorized version of the new pinch valves, alongside the GEMÜ Q30 and GEMÜ Q40 piston actuators, in plastic and stainless steel respectively, which are both pneumatically operated. The valves are specially designed for single-use applications and facilitate fast and simple replacement of media-conveying tubes.

A compressor is used to control or regulate the flow of media in the tube. The specially developed contour of the compressor ensures the pressure applied to the tubes is very gentle. This minimizes the stress and extends the service life.

The new pinch valves are designed to allow fast, simple replacement of tubes without tools. At the same time, a circlip prevents accidental opening of the tube bracket. The tube holder also serves as a safety guard during operation.

One valve size can be used for several nominal tube sizes. Should you need to change the size of the tube within a valve size, the tube holder and the compressor can be replaced afterwards. The actuators remain in the system and must not be removed.

For panel mounting of the valves, in a cleanroom for example, an optional flange plate in stainless steel is available.

The GEMÜ Q series is suitable for a wide variety of applications such as media mixing, fermentation or cell harvesting. Further applications may include purification, filtration or chromatography.

For more information on GEMÜ pinch valves and the single-use portfolio, visit the GEMÜ website at www.gemu-group.com/single-use.

The GEMÜ Group develops and manufactures valves, measurement and control systems for liquids, vapours and gases. GEMÜ is a global market leader when it comes to solutions for sterile applications.

The globally focused, independent family-owned enterprise was founded in 1964. In 2011, Gert Müller took over as Managing Partner together with his cousin Stephan Müller, becoming the second generation to run the company. The Group achieved a turnover of over €330 million in 2020 and currently employs over 1900 members of staff worldwide, over 1100 of whom are in Germany. They have six manufacturing locations: Germany, Switzerland and France, as well as China, Brazil and the USA. Their worldwide marketing is carried out across 27 subsidiaries, coordinated from Germany. Thanks to a large network of commercial partners, GEMÜ is now active in over 50 countries on all continents.