The Ingelfingen-based technology company GEMÜ has once again been listed in the global market leader index of the University of St. Gallen and the Academy of German Global Market Leaders 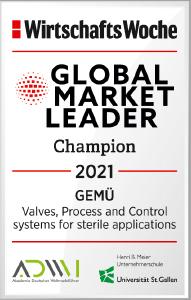 (PresseBox) ( Ingelfingen-Criesbach, 21-02-08 )
WirtschaftsWoche has awarded the owner-managed valve specialist GEMÜ the WirtschaftsWoche quality seal "Global Market Leader – Champion 2021" for what is already the fifth time in a row. In doing so, WirtschaftsWoche has recognized GEMÜ's renewed inclusion in the global market leader index in the segment "Valves and automation components: Valves, Process and Control systems for sterile applications".

The global market leader index is created in accordance with objective criteria and transparent selection processes under the scientific direction of Professor Dr Christoph Müller from the University of St. Gallen, in cooperation with the Academy of German Global Market Leaders (ADWM). Using this framework, the business magazine WirtschaftsWoche annually lists the 500 global market leaders in their respective sectors in a special issue.

The researchers designate companies as "Global Market Leader Champions" if they are first or second in the relevant market segment, are represented on at least three continents with their own production and/or sales companies, have an annual turnover of at least €50 million, and can demonstrate an export share or foreign share of at least 50% of their turnover. Another important criterion for a company to obtain the accolade of "Global Market Leader Champion" is to be (owner-)managed with headquarters in the German-speaking region (Germany, Austria or Switzerland).

As a family-owned, owner-managed business headquartered in Ingelfingen-Criesbach (in the German state of Baden-Württemberg), with 27 subsidiaries as well as six manufacturing sites in Germany, Switzerland, China, Brazil, France and the USA, GEMÜ fully satisfies these requirements. In addition to these prerequisites, it was the cutting-edge technology and market leadership in the field of valves, process and control systems for sterile applications that served as a crucial factor for WirtschaftsWoche in awarding the accolade and WirtschaftsWoche quality seal of "Global Market Leader – Champion 2021" to GEMÜ.

"In this unique and challenging year, we are very proud of the accolade of global market leader. It shows us that focusing on our innovative strength and customized customer solutions at the same time as investing in digital future issues has been the correct path," says Gert Müller, Managing Partner of the GEMÜ Group.

The GEMÜ Group develops and manufactures valves, measurement and control systems for liquids, vapours and gases. GEMÜ is a global market leader when it comes to solutions for sterile applications.

The globally focused, independent family-owned enterprise was founded in 1964. In 2011, Gert Müller took over as Managing Partner together with his cousin Stephan Müller, becoming the second generation to run the company. The Group achieved a turnover of over €330 million in 2020 and currently employs over 1900 members of staff worldwide, over 1100 of whom are in Germany. They have six manufacturing locations: Germany, Switzerland and France, as well as China, Brazil and the USA. Their worldwide marketing is carried out across 27 subsidiaries, coordinated from Germany. Thanks to a large network of commercial partners, GEMÜ is now active in over 50 countries on all continents.

The new pinch valves from GEMÜ make your tubes smile