Looking Back at the CeBIT: EAL4+ Certificate, Successful Business and 2570 Euro for Charity 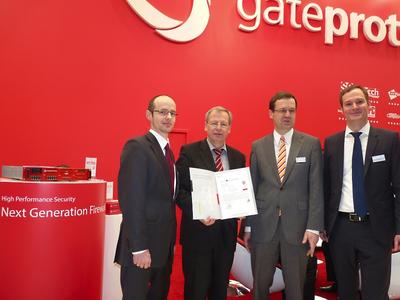 (PresseBox) ( Hamburg, 13-03-12 )
The German IT security specialist gateprotect is drawing a positive balance of the CeBIT. At the gateprotect booth in hall 12, business transactions were successfully concluded and pleasant conversations were held. Likewise, opinion leaders from politics, the media, the economy and sports took pleasure in meeting at the booth. Moreover, in a charitable activity, more than 2500 Euro were raised for underprivileged youth.

More than 500 persons participated in a very special CeBIT activity during the five days of the trade show. The Hamburg-based IT security provider gateprotect donated five Euro for a charitable purpose for each visitor who kept up two minutes on the race bike simulator. At the end, 2570 Euro were collected for the construction of a bicycle repair shop for underprivileged young people in Frankfurt, Mainfeld.

Georg Heckens and Frank Vytrisal from the cycling team "4Athletes powered by gateprotect", who will start at the "Race Across America" together with Dr. Peter Smeets in June, visited the gateprotect booth and made their contribution to the charity activity. With 17.79 kilowatt hours, Dr. Peter Smeets was one of the cyclists with the best performance on the race bike simulator.

Already on the first day of the trade show, representatives of the Federal Office for Information Security (BSI) visited the gateprotect booth. Bernd Kowalski, the director of the department "Secure Electronic Identities, Certification and Standardization" handed over the EAL4+ certification document under Common Criteria to the gateprotect board members Stephan Ziegler (CTO) and Dr. Reinhard Festag (CFO). This internationally acknowledged, highest certification level for firewalls that are freely available in the market warrants to customers worldwide that the firewall solution has been developed in line with strict regulations and complies with top quality and security standards.

With the Secure Web Gateway, the security audit and the new hardware of the GPZ series for enterprise customers, gateprotect benefited from the trade show as an occasion to introduce innovative new developments to the public and its partners.

gateprotect AG Germany has been a leading, globally acting provider of IT security solutions in the area of network security for ten years. These solutions comprise next generation firewalls with all commonly used UTM functionalities, managed security as well as VPN client systems. To minimize the risk of operator errors in highly complex security functions, gateprotect has developed the eGUI® interface concept. The patented eGUI® technology (ergonomic Graphic User Interface) and the Command Center based thereon for the configuration and administration of firewall systems for managed security service providers (MSSPs) increase the factual security in companies and allow for an efficient ongoing maintenance of the systems.

Reputable companies and institutions in more than 80 countries are among the users of about 23,000 installed licenses worldwide. Since 2010, gateprotect has been listed in the renowned Gartner "Magic Quadrant" for UTM firewall appliances in the SMB market. For the easy handling and comprehensive security of the UTM firewall solutions, gateprotect was the first German company to be honored with the Frost & Sullivan Excellence Award. The gateprotect firewall packet filtering core has furthermore successfully gone through the EAL4+ certification process under Common Criteria at the German Federal Office for Information Security (BSI).

Hacking-Angriff oder legitime Datensammlung? Das scheint bei den aktuellen Scraping-Vorfällen um Facebook, LinkedIn und Clubhouse Auslegungssache zu sein. Darum haben wir einen Jura-Professor in unser virtuelles Podcaststudio geholt und detailliert zu seinen fundierten, rechtlichen Einschätzungen befragt. read more
The publisher indicated in each case is solely responsible for the press releases above, the event or job offer displayed, and the image and sound material used (see company info when clicking on image/message title or company info right column). As a rule, the publisher is also the author of the press releases and the attached image, sound and information material.
The use of information published here for personal information and editorial processing is generally free of charge. Please clarify any copyright issues with the stated publisher before further use. In the event of publication, please send a specimen copy to service@pressebox.de.

Recommend Looking Back at the CeBIT: EAL4+ Certificate, Successful Business and 2570 Euro for Charity press release