The EDEKA Group Nordbayern-Sachsen-Thüringen expands and automates their regional warehouse in Gochsheim, Germany with SSI Schaefer 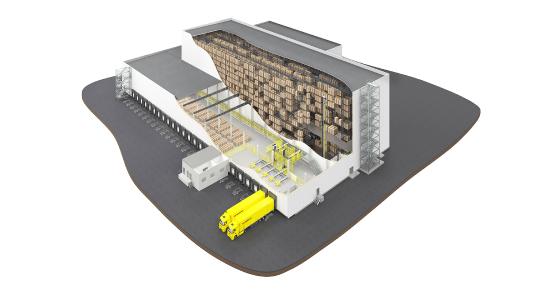 (PresseBox) ( Neunkirchen / Siegerland, 20-05-13 )
From the central warehouse in Gochsheim, EDEKA supplies part of their stores in Northern Bavaria. To guarantee the future of the location, EDEKA decided to complement the existing logistics center with another warehouse complex and thereby opted for automation. The order for implementing the warehouse extension was placed with the intralogistics expert SSI Schaefer with a location in Giebelstadt, Germany, close to the EDEKA warehouse in Gochsheim, Lower Franconia, Germany. Next to the existing building, a 4-aisle high-bay warehouse in silo design for double-deep storage of pallets is built. Four energy-efficient storage-retrieval machines, type SSI Exyz, are responsible for storage and retrieval. In addition, SSI Schaefer installs a roll container conveying system and a pallet conveying system.

The regional warehouse in Gochsheim receives goods from EDEKA suppliers as well as goods directly from the EDEKA central warehouse. After goods-in, the pallets are transported on a pallet conveying system to the high-bay warehouse (HBW) where the goods are temporarily stored. Each aisle in the HBW is equipped with two picking levels each working according to the tunnel picking concept. The pallets stored temporarily in the high-bay warehouse are supplied to ergonomically optimized picking work stations using gravity roller conveyors. There, the cases are picked manually onto the corresponding roll containers or pallets and transported to goods-out on a special roll container conveying system. If a store requests single-item pallets, these pallets are directly retrieved from the high-bay warehouse and automatically transported to goods-out on a pallet conveying system.

The SSI Schaefer logistics software WAMAS® is in charge of warehouse management. The software has been in use at the majority of the EDEKA companies throughout Germany since 2003. The order is complemented by a service and maintenance contract for the location.

Completion and commissioning of the new logistics complex is planned for 2021.

The SSI Schaefer Group is the world's leading provider of modular warehousing and logistics solutions. It employs approximately 10,500 people at its group headquarters in Neunkirchen (Germany), at eight domestic and international production sites, and at approximately 70 worldwide operative subsidiaries. Across six continents, SSI Schaefer develops and implements innovative industry-specific answers to its customers' unique challenges. As a result, it plays a key role in shaping the future of intralogistics.

SSI Schaefer designs, develops and manufactures systems for warehouses, industrial plants, workshops and offices. Its portfolio includes manual and automated solutions for warehousing, conveying, picking and sorting, plus technologies for waste management and recycling. In addition, SSI Schaefer is now a leading provider of modular, regularly updated software for in-house material flows. Its IT team, with a headcount in excess of 1,100, develops high-performance applications, and provides customers with in-depth advice on the intelligent combination of software with intralogistics equipment. SSI Schaefer's broad IT offering, including its own WAMAS® and SAP products, delivers seamless support for all warehouse and material flow management processes. Solutions from SSI Schaefer improve the productivity and efficiency of customer organizations - not least through the highly precise monitoring, visualization and analysis of operational metrics for proactive intralogistics management.