CEMAFON General Assembly was held in Maranello Italy in June 2013. 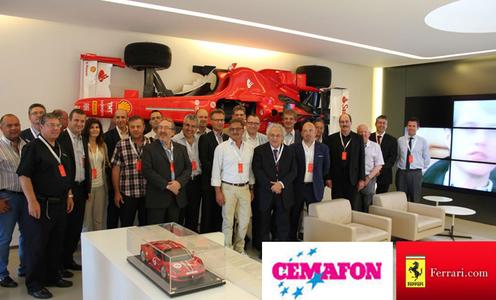 (PresseBox) ( Füssen, 13-07-04 )
Inspired by the opportunity to visit the FERRARI plant, several CEMAFON members from all over of Europe gathered for the convention. The renown luxury car producer and several time Formula 1-champion FERRARI is a symbol of sustainable success, high end car production in Europe and is an example of remarkable social basics for the entire workforce.

Considered as the ideal location, Maranello provided for the right atmosphere and spirit to discuss the current and future outlook of the European Foundry Machinery.

CEMAFON President Gabriele Galante (IMF Group) adjured the participants to think and to act as part of the European community, “ The way you deal with your workers is a major aspect of your success and the European target has to remain best quality”, emphasized Galante.

Regarding the economic situation of the European supplier industry, Dr. Ioannis Ioannidis of Oskar Frech presented his paper with highly significant figures.

Although Ioannidis recognizes stagnancy and downswing at the moment, Germany is also behind from last year´s figure, he expects a recovery at the end of 2013 in the long run.

Ioannidis further explained, “The message is, we will have a good 2014 and we are living and working in the strongest economics of the world – Be proud of it !”

CEMAFON companies could also be seen as “little FERRARIS”.

The current situation of the European Foundry Industry was presented by Max Schumacher (CAEF).

At a glance the European Foundry Association considers year 2013 to be “the second difficult year in a row”. Mr. Schumacher affirmed that the first and second quarter of 2013 was very weak, particularly in the truck and mining industry. Coming soon: Presentation of Mr. Schumacher´s facts and figures on Opens external link in new windowwww.foundry-planet.com

Rounding up the discussion of the economic situation in Europe, Roberto Vavassori of BREMBO S.p.A., Director of Business Development and President of ANFIA, designed a cautious development for the international Automotive economy.

“The European castings are also competitive against China in these days”, elaborated Vavassori.

“The main purpose until 2020 should be to provide lean, clean and safe vehicles and this affects also the strong components industry.”

But what about foreign markets? In Vavassoni´s opinion, Russia might be an interesting future market, and the US is also calling for new investments while India`s development in the Automotive sector is disappointing.

Further papers in this assembly:

How to promote Industrial Strength throughout the World
CEMAFON Concept, Gabriele Galante

Mr. Girao described the economic and financial situation as not being very stable in Europe at the moment. There are very innovative countries like Sweden, Denmark, Germany and Finland and then there are other countries such as Romania and Bulgaria with a backlog demand. All together they are suffering from high energy costs in comparison to the US industry or China.

Nevertheless, industry will remain the economic core of the development in Europe, but there are many political and social demands, even for the EU in order to save Europe´s position in the world .

The engineering industry in Europe is the most competitive in the world. The population as well politicians have no idea how much industry has changed in the last 50 years.

Girao requests initiatives for promotion, venture capital for small and medium enterprises and a kind of “fitness check” for the industry. The conclusion of his message is: “Don´t be too shy Europeans to show your outstanding position”.

That is also what CEMAFON President Galante bears out in his conclusion. On the behalf of CEMAFON, IFF and CAEF he called on the suppliers of castings, machines and services to be aware of the markets and the changes.

As for looking into new markets, he considered that Asia that will be part of the future, but Europe is not the past.

With this, Mr. Galante invited the delegates to promote Europe´s excellence with a common voice.

Next IFF (International Foundry Forum 2014)
Dr. Timo Würz (CEMAFON, General Secretary) announced that the next IFF will take place in Venice (IT) September 12-13, 2014