Waste heat is put to use 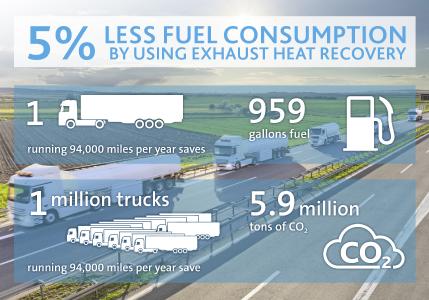 (PresseBox) ( Weinheim (Germany), 16-09-20 )
Diesel engines in commercial vehicles today work extremely efficiently. For example, in long-haul trucks, it is possible to convert about 40 percent of the energy chemically bound up in the fuel into forward movement. A large portion of the currently-unusable energy escapes into the environment as exhaust heat. More and more manufacturers of commercial vehicles are working on new concepts, which convert some of the exhaust heat into kinetic energy. In this way, the fuel consumption of heavy trucks is expected to be cut by a minimum of 5 percent. Freudenberg Sealing Technologies supports such developments with innovative sealing solutions.

The transformation of heat into mechanical energy is possible with the help of a thermodynamic process known as the Organic Rankine Cycle (ORC), named after the Scottish physicist William Rankine (1820-1872). This circulation process, so far used solely in industrial plants, works like this: A working fluid is pumped from an accumulator into a heat exchanger along which hot exhaust gas is flowing. The fluid vaporizes over the course of the process. The steam is further heated, much as in a steam engine, to temperatures as high as 250°C (482°F). At the same time, the pressure rises as high as 40 bar. In an expansion engine, the pressure sets either a piston or a turbine into motion. This mechanical work can be passed directly on to the truck’s driveshaft. Or, alternatively, a generator can be driven to produce electricity. The steam is guided at reduced pressure into a condenser behind the expansion engine. The condenser cools the working medium to the point that it is again fluid. As a result, fluid is not wasted – on the contrary, it is intended to flow in the circuit, as much as possible without leaks or need for maintenance. The sole purpose of the pressure-controlled accumulator tank is to make sufficient fluid available under all operating conditions.

High-tech seals are necessary to apply such concepts in the harsh conditions of heavy duty transport. The manufacturers’ minimum expectation for the system’s lifespan is at least 1.6 million kilometers (approx. 995,000 miles). It is essential to seal the pipe connections between the condenser and the vaporizer as precisely as the inner workings of the pump, the valves and the expansion engine. The chemical composition of the working fluid represents a special challenge. There is no industry standard yet for the medium. But various scientific investigations by German Research Association for Combustion Engines (FVV) and other organizations, show that ethanol would be a suitable fluid. This monohydric alcohol has a relatively low boiling point of 78°C (173°C) in its favor, which means that it is possible to generate steam from exhaust heat without difficulty. At the same time, its freezing point, -115°C (-175°F), is so low that it is impossible for the tank to freeze. In addition, ethanol, which is used in many cosmetic products, is non-toxic to human skin.

But ethanol poses a challenge to the elastomer seals that are traditionally used in vehicle manufacturing. That’s because ethanol leads to the increased swelling of the material, which can lead to the system’s inadequate leak-tightness if its design is flawed. There can even be a negative impact on mechanical properties such as elongation at break and tensile strength. Since biogenically produced ethanol is already contained in today’s gasolines or has substituted it up to a 100 percent in the Brazilian market, among others, Freudenberg Sealing Technologies has already developed ethanol-resistant seals. Seals made of fluoro rubber have already proven themselves in fuel-conducting components of the so-called flex-fuel engines. In systems with waste heat recovery, the material mixture must be adapted to the higher temperatures. Furthermore, systems that are designed to utilize hot air exhaust gases are installed near the engine in the tractor where the installation space is tight. So systems that simultaneously seal and make a mechanical connection with the piping could become a key approach to implementing assemblies technically. Freudenberg Sealing Technologies now has such a sealing solution: its “Plug & Seal” product. Yet another component of the ORC system is a pressure-regulated accumulator for the working fluid. Freudenberg Sealing Technologies has already successfully developed these accumulators in high volumes for various industrial applications.

“Exhaust heat recovery systems based on the Organic Rankine Cycle are still in the pre-development stage,” said Oswaldo Anaya of Freudenberg Sealing Technologies. “Series applications in the coming decade are becoming increasingly likely due to stricter CO2 regulations and high cost pressures in the transportation sector.” Due to expanding freight transport volume, fuel savings of five percent would mean a substantial reduction in CO2 emissions. This would yield per-vehicle savings of 2,250 liters (595 gal.) of diesel for an annual mileage of 150,000 km (94,000 miles) at an average of fuel consumption of 30 liters per 100 km driven. According to estimates, the system would pay for itself within two years due to the fuel savings. If a million newly registered heavy-duty commercial vehicles were equipped with such a system, the result would be overall savings of 2.25 billion liters, which corresponds to the elimination of 5.9 million tons of carbon dioxide per year.

The use of heat recovery systems is not exclusively limited to heavy-duty commercial vehicles. The direct mechanical energy gain from the organic Rankin cycle is also suited to ship engines, for example, where they are already in series use. Car manufacturers are now doing research on thermoelectric generators (TEG), which are designed to generate electric current from exhaust heat. The use of TEG technology is expected to reduce fuel consumption by two to three percent. This works with the help of the Seebeck effect, named for the German physicist Thomas Seebeck (1770-1831): Electrical voltage results if two electrical conductors exhibiting a temperature difference are connected. Whether the effect is great enough to be utilized technologically for a supply of onboard electrical current largely depends on the molecular structure of the conducting material. Most of the materials now being investigated only function within a specified temperature window. If the temperature of the exhaust gases exceeds the maximum permissible value, the flow of electricity comes to a halt. “It is therefore obvious that thermoelectric systems must be connected to their own cooling circuit,” said Anaya. “Seals play a crucial role for the sustainably reliable functioning of every cooling system.” That is why Freudenberg Sealing Technologies is supporting research into systems of this kind.

In the future, whether in cars or heavy commercial vehicles, waste heat losses will not be a combustion waste product that at most helps to heat the interior. Instead, it will be a source of valuable mechanical or electrical energy.

As the leading specialist in sealing applications and their markets, Freudenberg Sealing Technologies is a supplier as well as a development and service partner serving customers in a wide variety of sectors including the automotive industry, civil aviation, mechanical engineering, shipbuilding, the food and pharmaceuticals industries, and agricultural and construction machinery. In 2015, Freudenberg Sealing Technologies generated sales of about €2.3 billion and employed more than 15,000 people. More information at www.fst.com

The company is part to the global Freudenberg Group which, with its Business Areas Seals and Vibration Control Technology, Nonwovens and Filtration, Household Products as well as Specialties and Others. In 2015, the Group generated sales of more than

€7.5 billion in and employed approximately 40,000 associates in around 60 countries. More information is available at www.freudenberg.com.

Recommend Waste heat is put to use press release