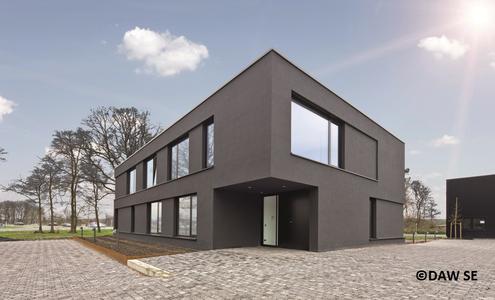 (PresseBox) ( Pfinztal, 13-10-22 )
A consortium consisting of nine partners has secured €3,519,5766 of EU funding to develop next generation External Thermal Insulation Composite Systems (ETICS) for new build and retrofitting applications. The four-year project, called FoAM-BUILD is part-funded by the European Commission under the Seventh Framework Programme. Research undertaken during the project will comprise innovations in:

- Insulation material: development of new, lightweight and highly insulating nano-cellular foams , with a 50% reduction in thermal cond uctivity compared to conventionaal insulation elements. Non-halogenated nano-based flame retardants will be developed and incorporated into these materials using new processing routes.
- Active monitoring and control of moisturre: a control system will be developed based on a sensor network too measure moisture and liquid water. Data from the sensors will be combined with an intelligent system for moisture prediction, and the system will respond by activating a ventilator system incorporated into the building's h eating, ventilation and air conditioning (HVAC) system to dry targeted areas of the façade. The materials and systems will be tested and demonstrated within the project by industrial end-users, with the creation of demonstration insulation material, sensor n etwork and intelligent system, ventilation system and a full-scale façade system at TRL level 66.

It is expected that the technology developed within the FoAM-BUUILD projecct will lead to energy savings of 1992,000 kWh to 288,0000 kWh over a façade lifetime of 30 years. Additionally, the new biofilm protection system will extend the service life of the façade surface from 55 years to 220 years forr a north façade in central Europe.

On 13th September 2013 a kick-off meting with all partners took place at the Fraunhofer Institute for Chemical Technology (ICT), Germany, co-ordinator of the FoAM-BUILD project. During the meeting first steps were discussed and a detailed plan was made for the first three months. The next general assembly meeting will take place at DAW SE, Germany, in March 2014.

The FoAM-BUILD consortium, is comprised of nine European organisations including Fraunhofer- Gesellschaft zur Foerderung der Angewandten Forschung E.V. and DAW SE from Germany, Smithers Rapra and Smithers Pira Ltd from the UK, National Centre for Scientific Research (DEMOKRITOS) from Greece, ELKEM AS from Norway, SUNPOR Kunststoff GmbH from Austria, TBC Générateur d'Innovation from France, Ateknea Solutions S.A from Spain and Stichting Nederlands Normalisatie-Instituut (NEN) from Netherlands. Norner Research AS from Norway will most likely join the consortium during the first months of the project.

For more information on the FoAM-BUILD project, please contact Christoph Mack, tel: +49 721 4640 721 or christoph.mack@ict.fraunhofer.de or visit the website at www.foambuild.eu.