Launch of a five-year, 6.1 million euros EU-Horizon 2020 project that aims to build a new type of powerful computer based on biomolecules 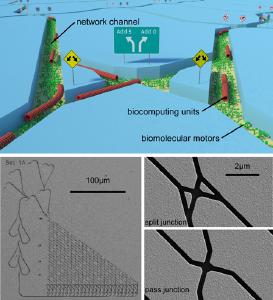 (PresseBox) ( Chemnitz, 17-03-20 )
Crashing computers or smartphones and software security holes that allow hackers to steal millions of passwords could be prevented if it were possible to design and verify error-free software. Unfortunately, to date, this is a problem that neither engineers nor supercomputers can solve. One reason is that the computing power required to verify the correct function of many types of software scales exponentially with the size of the program, so that processing speed, energy consumption and cooling of conventional microelectronic processors prevent current computers from verifying large programs.

The recently launched research project aims to develop a biocomputer that can overcome the two main obstacles faced by today’s supercomputers: first, they use vast amounts of electric power – so much that the development of more powerful computers is hampered primarily by limitations in the ability to cool the processors. Second, they cannot do two things at the same time. The EU now funds a project that will develop a computer based on highly efficient molecular motors that will use a fraction of the energy of existing computers, and that can tackle problems where many solutions need to be explored simultaneously.

The potential impact of the project results is not limited to the design of error-free software: “Practically all really interesting mathematical problems of our time cannot be computed efficiently with our current computer technology”, says Dan V. Nicolau, Ph.D. M.D., from the UK-based enterprise Molecular Sense, who had the original idea of using biomolecular motors as computers. This is the limit that the new project aims to push by using biomolecular motors as computing units: The idea is that biomolecular machines, each only a few billionth of a meter (nanometers) in size, can solve problems by moving through a nanofabricated network of channels designed to represent a mathematical algorithm (see fig.1); an approach the scientists in the project termed “network-based biocomputation”. Whenever the biomolecules reach a junction in the network, they either add a number to the sum they are calculating or leave it out. That way, each biomolecule acts as a tiny computer with processor and memory. While an individual biomolecule is much slower than a current computer, they are self-assembling so that they can be used in large numbers, quickly adding up their computing power. The researchers have demonstrated that this works in a recent publication in the

Proceedings of the National Academy of the USA (PNAS). “We are using molecular motors of the cell that have been optimized by a billion years of evolution to be highly energy efficient nanomachines”, says Prof. Stefan Diez who is heading the participating TU Dresden research team, “and the biological computing units can multiply themselves to adapt to the difficulty of the mathematical problem”, adds Dr. Till Korten from TU Dresden, co-coordinator of the Bio4Comp project and equally contributing first author of the PNAS publication.

The research consortium will focus on developing the technology required to scale up network-based biocomputers to a point at which they are able to compete with other alternative computing approaches such as DNA computing and quantum computing. In the process, they aim to attract a larger scientific and economic community that will focus on developing the technology into a viable alternative computing approach. To do so, they have received 6.1 million euros from the Future & Emerging Technologies (FET) programme of the EU to run a highly interdisciplinary research project touching mathematics, biology, engineering, and computation.

Fraunhofer ENAS will contribute with its expertise in nanopatterning and smart systems integration to allow a scalable fabrication of the biocomputation network structures. “An exciting feature of this project is that standard microfabrication tools known from microelectronics manufacturing and advanced nanopatterning techniques are used for this task in an entirely new context“, says Prof. Stefan E. Schulz, Deputy Director of Fraunhofer ENAS, Head of the Business Unit Micro and Nano Electronics and principal investigator for the EU project Bio4Comp within the Fraunhofer-Gesellschaft. The main tasks of the work will be performed in the nanopatterning group at Fraunhofer ENAS, headed by Dr. Danny Reuter, using electron beam nanolithography (EBL) tackling the engineering challenges of upscaling the footprint of the channel networks in parallel to a downsizing of the interchannel distances and diameters.

Fraunhofer ISC will contribute with its core competence in materials design and functionalization in the field of hybrid polymers. The institute has taken over the task of writing error-free junctions between the microfluidic channels. For this aim, two-photon polymerization (2PP) as a true three-dimensional laser writing technique is used. The project work envisages bridge-like microstructures that provide accurate directional guiding for the motor proteins. ”The task is really challenging, as an error-free movement of the protein agents in the junctions requires sub-µm feature sizes and high precision”, explains Gerhard Domann, Head of the Business Unit Optics and Electronics at Fraunhofer ISC. “Moreover, a defined chemical interaction between the structures and the nanoscaled proteins has to be ensured by specially designed hybrid polymer materials”, he adds.

In common challenge for Fraunhofer will be the integration of microfluidic elements such as the junctions developed at Fraunhofer ISC to be included into channel structures fabricated at Fraunhofer ENAS to a functional biocomputation network structure. The further partners for the Bio4Comp project comprise Lund University and Linnæus University Kalmar in Sweden, the Molecular Sense Ltd. in Oxford, UK, the Bar-Ilan University in Ramat-Gan, Israel, and Dresden University of Technology.

The project Bio4Comp (2017 – 2021) is funded by Horizon 2020, the EU framework program for Research and Innovation under Grant Agreement No 732482. More information can be found on the research consortium’s webpage: www.bio4comp.eu.

Artificial Intelligence for IT Operations

Heutige IT-Umgebungen verändern sich dynamisch. Anwendungen werden häufig nicht mehr auf physischen Systemen im eigenen Rechenzentrum (on-premises) bereitgestellt, sondern über öffentliche oder private Cloud-Umgebungen verteilt betrieben. Teilweise wechseln Ressourcen im laufenden Betrieb. read more
The publisher indicated in each case is solely responsible for the press releases above, the event or job offer displayed, and the image and sound material used (see company info when clicking on image/message title or company info right column). As a rule, the publisher is also the author of the press releases and the attached image, sound and information material.
The use of information published here for personal information and editorial processing is generally free of charge. Please clarify any copyright issues with the stated publisher before further use. In the event of publication, please send a specimen copy to service@pressebox.de.