The Swiss Alpine Club (SAC) relies on the strategic, specialist and technical expertise of foryouandyourcustomers 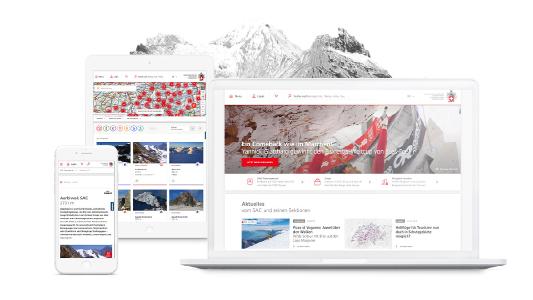 (PresseBox) ( Stuttgart, 18-11-23 )
The Swiss Alpine Club (SAC) unveiled its new website in autumn 2018. The focus was on another new feature: the SAC Route Portal. This was just one of the many milestones along the three-year ‘quest’ for digital literacy. Fifteen employees from foryouandyourcustomers used their various areas of expertise to support the SAC office with strategic, professional and technical advice from the very start of the project onwards, in terms of devising the concept and the digital design. Let’s take a quick look at a project snapshot.

When the SAC decided to implement the SAC+ and SA2020 (now the SAC Route Portal) projects about three years ago, they turned to Peter Zwyssig, Director of Sales & Consulting at the foryouandyourcustomers Group, an experienced strategist and enthusiastic energiser who proved the perfect choice for this project.

This was followed by an intensive period of collaboration between the Swiss Alpine Club and foryouandyourcustomers. The SAC’s entire range of services was showcased and reframed in an array of dialogues. In doing so, both the in-house view from the SAC office and the external perspective of its customers – existing and potential members alike – were taken into consideration.

The result was a jointly developed, deliberately ambitious digitalisation strategy. This was complemented by measurable goals and programme planning in phases. A highly motivated 20-person team took part in this initial project. As such, the essence of the plan put together back then represents a sound point of reference to this day. A clickable prototype of the product vision was also created and served as means of communication between all of those involved in the project, thus making a significant contribution towards the general understanding of the planned measures. Handily, the user experience designer assigned to the project – Claus Stachl of foryouandyourcustomers Feldkirch – is a passionate climber and mountaineer himself.

However, the real gain at this time was the noticeable increase in digital expertise among all of the employees engaged in the project. After all, collective progress is impossible without the individuals involved developing as well.

Coping with reality now and in the future

The SAC soon managed to set up a skilled development team working from different locations. The aim was to ‘cut back the blue-sky thinking to what was actually achievable within a reasonable time frame’, said Marek Polacek, SAC+ Project Manager. Tackling this challenging feat of coordination required plenty of finesse and methodological skill. Agile working principles were not followed rigidly, but modified for the team in such a way that they worked in the end, the odd sleepless night notwithstanding. Moreover, it also required a corresponding team, whose members committed a lot of time and dedication to the project. Once this intermediate stage was reached, the project lost some of its urgency, but after a short stabilisation phase there remained a large backlog awaiting implementation: offline maps, drawing individual routes, favourite lists, personalised features, etc. The SAC’s digital content is also to be expanded and improved on an ongoing basis in 2019.

The core of the SAC’s new online platform – the SAC Route Portal – is both an archiving project and a future-oriented source of high-quality route and hut information. Accordingly, this initiative was never intended to replace the popular SAC district or area guides in book form. Rather, the possibilities afforded by the digital format were to be used to enhance classic route planning in a meaningful way. Ultimately, the aim is to maintain the SAC’s status as the go-to provider of information on the Swiss Alps in future, and across all channels. Fabian Lippuner, who is responsible for coordinating around 40 authors at the SAC, talks about a cultural shift. ‘We’re used to thinking in terms of printed books and new editions, but nowadays written content is issued live, at the touch of a button.’ More than 1,200 routes were published on the new Route Portal over the course of around one year of productive writing work. The goal for the coming three years is just as ambitious: some 10,000 entries.

Fabian Lippuner believes that there are clear advantages to having a curated online route and hut list. There is a demand for his organisation to offer information that is simply more up to date, to give mountain climbers verified status warnings, provide them with useful information for their circumstances, and to offer all routes in the country’s four languages – an extremely important issue in Switzerland.

At the very beginning of the project, the users of the forthcoming portal were invited to put forward their requests and wishes. Responses included a high level of personalisation, greater integration of the section content, smart interlinking of services, products and content, not to mention ideas for a groundbreaking route portal. Meeting all of these expectations would have been more like climbing the Schreckhorn than ambling up the Uetliberg. A lot has been achieved so far, but the final peak is still a long way off.

In the time-honoured tradition of careful route planning, the project risk should always be calculable. For that reason, the decision was made to introduce the indispensable features first, with a high level of quality, and gradually build digital expertise. Software developers talk about a minimal viable product (MVP): a secure, attractive base camp, from where you can set out for new digital heights. And when it comes to expeditions like this, you know where the journey is supposed to take you. In reality, however, the real challenge – but also the joy – lies in breaking out into the unknown. We would like to congratulate the Swiss Alpine Club, and all of those involved in the project in particular, for their courage in taking this step, and all the more so for pulling off a successful digitalisation initiative.

We at foryouandyourcustomers are grateful for being asked to take part and are looking forward to what is to come!

The information model developed by Stefan Berner sets out the terms and definitions to be used for a company. Any organisation can use this glossary to create their own terminology which helps prevent misunderstandings and thereby improves the quality of communication both internally and externally. However, this glossary is worth nothing to companies operating internationally if it is only available in one language. A language in which all participants are proficient should be used to create an information model. ‘Company English’ is not suitable in most cases, since as the lowest common denominator in terms of understanding language, it is not adequate for an intense debate on correct terms and phrases.

In order for an information model to impact on communication in a multinational company, it has to be translated into a company’s principal languages.

At foryouandyourcustomers, we have added to the Oracle Data Modeler so that it can manage several languages.

Switching between languages takes place directly in the modeler. Any number of languages can be defined (however, this will then involve work on the equivalent number of translations!). Texts in the various languages are processed either directly in the modeler in the elements themselves, or in Excel files which are created from the modeler and imported again after processing. This makes it possible for a person who is not part of the modelling team to deal with the translation. Texts can also be translated automatically using an online translation service. When creating new elements, the original language text is copied with the label *DE* into the fields for the other languages. This enables recognition of the relevant text to be translated.

A change of name or text in a language means that next time the language changes, all translations of the changed name or text will be marked with an *. This indicates text that has already been translated, which may need to be adapted.


The add-on for the free Oracle Data Modeler tool will be offered in the context of our consultancy work and set up in the respective environment. A one-off automatic text translation service using Deepl can also be provided by foryouandyourcustomers.

Eine Studie von Cloudflight legt den Betreibern von Rechenzentren den Einsatz hyperkonvergenter Infrastrukturen ans Herz, um bis zu 50 Prozent an Kosten einzusparen. IDC erklärt Interessenten, wie sie die richtige hyperkonvergente Lösung für sich finden. read more
The publisher indicated in each case is solely responsible for the press releases above, the event or job offer displayed, and the image and sound material used (see company info when clicking on image/message title or company info right column). As a rule, the publisher is also the author of the press releases and the attached image, sound and information material.
The use of information published here for personal information and editorial processing is generally free of charge. Please clarify any copyright issues with the stated publisher before further use. In the event of publication, please send a specimen copy to service@pressebox.de.