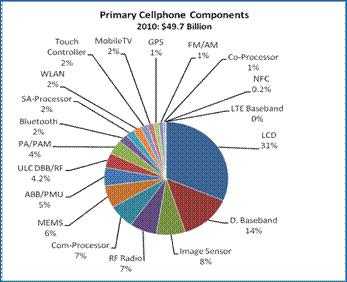 (PresseBox) ( Düsseldorf, 10-11-03 )
The semiconductor market is up some 35% this year and a number of chip companies are sitting on piles of cash as they look for more meaningful (and dependable) direction from Washington and Wall Street. So, rather than commit to hiring lots of people for the jobs that have either disappeared or have gone overseas, they are committing their resources to mergers and acquisitions (M&As). After all, many companies view such actions as simply another investment in R&D. Since the stock market is not yet friendly to high-tech IPOs, many emerging chip houses (who have developed products, but don't yet have profitable shipment volumes) see M&A as the current alternative. Check out some of the recent examples below:

In mid-October, Broadcom announced its acquisition/merger of WiMAX house Beceem. Broadcom has been looking at ways to add LTE to its current 2.5G/3G cellphone chip line without having to start from scratch. And like all of the other WiMAX chip vendors, Beceem has been morphing into an LTE modem house, and Broadcom needs to field an LTE cellphone modem within the next year or so. Announcement of the Percello acquisition came in late October.

Beceem had planned on an IPO, but it was built on a strong WiMAX story, and WiMAX is clearly a market that has reached its peak and the company does not yet have an LTE product. Consequently, the M&A route was the best way to move forward. Word on the street is that VCs (including Intel) had invested about $200 million in Beceem, so the $316 price presents a nice return for the VCs.

Israel-based Percello is a major supplier of UMTS femtocell basebands, and Ubiquisys is its biggest customer. Ubiquisys, in turn, is the primary femtocell supplier to AT&T in the U.S., SoftBank in Japan and SFR in France. The acquisition price was said to be $86 million; not a bad return on the estimated $20 million of investor backing. So, Broadcom instantly becomes a leader in the femtocell market and Ubiquisys also claims a budding LTE capability, further enhancing Broadcom's wireless portfolio.

BTW, Beceem earlier announced that it had licensed CEVA DSP core technology for its LTE product development, and Broadcom is already a CEVA licensee for both 2.5G and 3G modems. Presumably, this will help to ease the technology migration between the two companies. I don't expect Broadcom LTE modems to be announced before late 2011 or early 2012.

Don't expect to see a press release on it (since it doesn't represent a material change to their finances), but Qualcomm has purchased 4G modem chip house Sandbridge Technologies Inc. Sandbridge had a multicore DSP design that was a departure from anything else on the market, and it appeared to be powerful enough for LTE. However, the company failed to get a significant "socket" for the chip, even though Samsung was one of the backers. Rumor has it that that the purchase was primarily for patents and IP, with no plans to carry the product line forward. The transaction price is rumored to be about $55 million.

M&A continuing...PMC-Sierra, a chip company that bills itself as "The premier Internet infrastructure semiconductor solution provider" has acquired Texas and Israel-based Wintegra, Inc. for a reported $240 million. Wintegra had filed for an IPO last may, hoping to raise $115 million. The acquisition was clearly the more attractive route. Wintegra makes communication processor chips employed in cellular base stations and backhaul infrastructure. Expect many more such acquisitions from cash-rich chip houses.

Renesas Electronics Corp. is creating a new subsidiary to absorb its newly-acquired Nokia cellphone modem chip business and its current Mobile Multimedia SoC Division. Effective December 1st, Renesas Mobile Corporation will be a separate entity that will serve to "enable Renesas Electronics to offer more robust products targeting expanding markets worldwide for LTE/HSPA+ devices, including markets for mobile phones and car navigation systems." As of November 30, 2010, Renesas Electronics will inherit the personnel from Nokia's wireless modem business located in Finland, India, Britain, Denmark, China, and other countries. New local subsidiaries of Renesas Mobile will be established in Finland, India, and China, and the employees will be transferred to these local subsidiaries. In addition to these regions, Renesas Design France S.A.S, which is currently Renesas Electronics' SoC design company, also will become a subsidiary of Renesas Mobile. As a result, more than 75 percent of the 1,800 total employees of Renesas Mobile will be based outside Japan. Renesas Mobile will ship its first sample of modem chipset solutions incorporating LTE/HSPA+ modems in Q4 FY2010 to customers worldwide, including Nokia, which has already agreed to adopt Renesas Mobile's offering into their products. I'm impressed with the organizational move, since the wireless business is a significantly different from the company's mainstream MCU business.

How do the Application Processor Houses counter Snapdragon?

Currently, Texas Instruments leads in 3G cellphone application processor shipments with their OMAP3/4 product line. But, Qualcomm is nipping at their heels with its Snapdragon communication processor which incorporates the Scorpion application processor on the same die with the cellular modem. And Snapdragon has been getting the most "ink" in the press of late. Since TI has exited the cellular modem business (albeit still shipping products to Nokia through 2011), they don't have a "com-processor" offering to counter the 3G cellular modem sockets that Qualcomm now dominates. So the question arises, "Should TI buy its way back into the cellular modem market?" That move could allow TI to have a product to compete directly with Snapdragon. Besides, we predict that Com-Processors will be almost three-quarters of the Application Processor shipments in 2014, otherwise the baseband-less houses will be addressing only a quarter of the market. Don't forget, Intel bought its way back into the (previously-abandoned) cellphone baseband market by acquiring Infineon.

Then, there's Nvidia in a similar situation, with a worthy application processor with their Tegra 1/2 product line, but no 3G modem of its own to pair with. Both companies are big enough to buy one of the few remaining modem houses, should they decide to take that route. However since Infineon has been taken out of play by Intel, that leaves only a few acquisition possibilities; preferably ones with a 3G/LTE roadmap. Likely, the front runner would be Icera Semiconductor, but that company is anticipating an IPO early next year that would likely value them close to $1billion. Of course, smaller WiMAX and LTE-only houses (who don't currently have a 3G play) are cheaper possibilities, but would require a heavier R&D investment and an additional year or two to have a competitive product. Such possibilities include Altair, Sequans and Wavesat. As mentioned above, next year will see a changing cellular landscape through M&As and IPOs.

WiMAX/XGP chip vendor Wavesat is currently sampling its OD9010 LTE Cat 3 FDD/LDD modem chip (which is also 802.16e Wave 2-compliant). That chip is in field trials, but the more interesting item is the fact that the company plans to field a multifunction cellphone modem next year that not only provides LTE capability but also "handles all known 3G protocols." We take that to also mean both CDMA-1xEV-DO Rev A and HSPA+ on the same chip. Wavesat claims to have been through 9 generations of OFDM silicon, to-date. But, their future plans are pretty ambitious for a company that's a fraction of the size of the big guys. But, we'll be watching.

The current LTE user equipment market is 99% data dongles (USB modems) and only Altair, Qualcomm and Samsung are currently shipping to that market in quantity. It should be noted, however, that Sequans TD-LTE/SAE modems have been trialed in Shanghai's World Expo Park and the company is planning on introducing a combo WiMAX/LTE modem in 2011. ST-Ericsson also displayed its LTE modems at the Shanghai World Expo, as part of Quanta Computer's TD-LTE tablet. The LTE modem market is currently in the hundreds of thousands of units annually, but we predict will kick into the single-digit millions in late 2011.

This week, NXP Semiconductors introduced its new LPC4000 family of processor chips that bring the advantage of developing DSP and MCU applications within a single architecture and development environment. The heart of the product line is the ARM Cortex-M4 which provides DSP features such as single-cycle MAC, single instruction multiple data (SIMD) techniques, saturating arithmetic, and a floating point unit. The Cortex-M0 subsystem processor offloads many of the data movement and I/O handling duties that can drain the bandwidth of the Cortex-M4 core. This allows the Cortex-M4 to concentrate fully on crunching numbers for digital DSP applications such as high-performance audio or sophisticated motor control. Our surveys have indicated that traditional DSPs dedicate some 50% of more of their processor cycles to non-DSP functions, so the approach makes a lot of sense. NXP had earlier introduced a Cortex-M3 based product and now the company has committed its future processor roadmap exclusively to ARM-based products.

It has been months in the making, but our newest market study, "Cellular Handset Chip Market'10" is now available. The new 548-page study provides strategies and insight for the many chip types serving the cellphone market and their vendors. The chart here illustrates the many devices covered in the study. The chips that are the substance of cellphones constitute almost a $50 billion market this year. The most expensive component of cellphones is the LCD display, and we cover them and popular touch screen controllers as well as more modem-specific chips like digital basebands and communication processors that include integral application processors. The study report discusses the many vendor changes in the 2010 market, brought about largely through acquisitions and mergers (and divestitures) that will shift market shares over time. Qualcomm continues as the cellular handset chip market leader, followed by Texas Instruments and ST-Ericsson. Next in rank is Infineon, now part of Intel, which continues its significant market presence. The report ranks the top 30 chip vendors overall and provides vendor market shares for each key chip type (and even by air interface). We believe that this is the most comprehensive study of all chips that serve the cellular handset market. Details are at: http://fwdconcepts.com/...

So geht “Work from Anywhere”