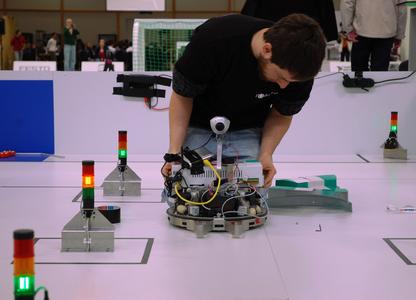 (PresseBox) ( Esslingen, 11-07-04 )
The Festo Logistics Competition is to be held during the RoboCup 2011 in Istanbul from 5 to 11 July 2011. An all-new approach is to be taken focusing on the future of logistics. Competitors from around the world will face often unknown production situations and be called upon to prove the effectiveness of their solutions.

The main focus is no longer on sports such as football and ice hockey - the new competition arena is more similar to an industrial production environment. Autonomous robots act as driverless transport systems charged with ensuring seamless logistic flows in complex manufacturing processes. They are aided by cutting-edge identification technologies, such as RFID and GPS navigation. But there will certainly be no shortage of challenges during the event. This is ensured by a selection of suitable programming systems and methods and the development and use of autonomous robots equipped with artificial intelligence. The event combines industrial relevance with sporting motivation to create a genuine occasion for all involved. With the aid of new logistics approaches and industrial competition equipment, the demonstration event sets high standards.

Fitted with artificial intelligence, programmed by IT experts, and equipped by mechatronics engineers with camera, sensors and an energy-efficient drive, the Robotino® is the guarantee for success in the Festo Logistics Competition. Correctly programmed, it can independently solve the given challenges or serve as a research and development platform for systems using artificial intelligence.

Festo's main focus is on innovation, and especially on solving significant problems such as those often encountered in industry. The participants will be the world's leading universities, who will face each other in teams equipped with three Robotinos® each. A total of 15 teams from varying nations will be competing against each other for the prestigious podium places. The countries represented are: Hungary, Korea, Turkey, Mexico, Spain, the United Emirates, Brazil and last but not least Germany with four teams from the university faculties engineering, IT and logistics.

The production event will be held in two competition areas measuring 6 x 6 m each, which both simulate a real production hall. The incoming and outgoing goods areas are located on the opposite sides of each competition area. There are ten machines in each production hall, and each machine has special functions unknown to the teams before the competition begins. The teams must programme three Robotinos each, which then fulfil their tasks in production fully autonomously by communicating with the machines.

Two teams compete at a time in the fifteen-minute games. The aim is to try to produce and deliver as many end products as possible using the Robotinos® as driverless transport systems. First, the Robotinos® must find out the unknown functions of the ten machines as fast as possible, then store their positions in the production hall, and finally transmit this information to the other Robotinos® of the respective team.

Every opportunity is obviously taken to crank up the excitement. As in reality, the odd machine can always suffer a breakdown. As soon as the machine's signal light flashes red, the Robotino® has to recognise the fault and search for a different machine which can finish producing the product. No easy task, as time is running and there are plenty of other orders waiting to be handled.

The main focus and driving force behind all the competitions is the desire of many young people to take on responsibility themselves and to overcome difficulties as a team. The realistic scenarios from the world of production will certainly push the eager competitors to the limits of their abilities. But, as they say - no pain, no gain! And a little sweat is always needed to bring out the best in such situations.

The competition will get underway with the first heats of 15 teams on 7 July. On Saturday, 9 July, the six best teams will then meet in the semi-final. And the stage is then set for the grand finale on Saturday, 10 July.

Dr. Theodor Niehaus, Managing Director of Festo Didactic, believes there are good reasons why Festo is supporting the RoboCup 2011 in two different capacities - as the organiser of one of the events and as main sponsor: "Young people interested in technology hardly know what an industrial robot looks like, and yet they imagine their later careers as engineers or mechatronics experts to be something like the competition event: surrounded by and responsible for automated, and perhaps intelligent, machines.

Further background details on the RoboCup:

The competition has long been regarded as a major attraction for scientists and students from Germany and abroad, as it gives them an opportunity to show off their skills and compete against the best. But the event is not the exclusive domain of experts - the competition is also enthusiastically followed by non-experts in the crowd who can cheer on their favourites. The first RoboCup competition was held in 1997. The initial aim was to promote research into artificial intelligence and robotics. Much has changed since those early days and there are now hardly any limits to the objectives pursued.

Mobile robotics competitions began in 2007 at the international WorldSkills competition. The Robotino® has been present in the RoboCup since 2009 and in the new Festo Logistics Competition since 2010.