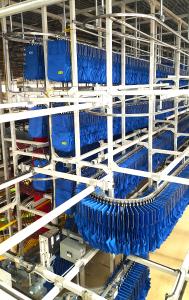 (PresseBox) ( Hinwil/Zürich, 17-06-22 )
US fashion retail chain Stage Stores used a Skyfall solution to modernise its regional distribution centre in Jacksonville, TX. It boasts impressively high efficiency and reliability, and with 12 sortation lines and over 5,000 transport pouches it is the first system of its kind that Swiss company Ferag AG has supplied to North America. The trading group uses Skyfall to handle its entire order fulfilment for 13 states across the American south, west and midwest.

Purchases of clothing, shoes and accessories have always been made through a wide variety of channels. Customers might buy the traditional way after trying on in a store, via the stubbornly surviving mail-order catalogue, by teleshopping, or instantly with a mouse click or swipe of a tablet or smartphone – of course these days, online ordering is gaining the upper hand. The Stage Stores chain, a fashion retail specialist, is no exception in this respect. In fact, it runs a truly multi-channel operation. With more than 850 brick-and-mortar stores and several internet portals, its US customer offering includes shoe and textile labels such as Calvin Klein, Clarks, Dockers, Jockey, Lee, Levis and Ralph Lauren. Corporate headquarters is located in Houston, TX, the port city where many of the goods sold in the US enter the country from overseas. A comprehensive restructuring of the company’s goods distribution processes and supply chains was necessary in light of the ongoing e-commerce boom and accompanying increase in order volume, as well as returns management. A principal objective of the fashion chain store was to automate as much as possible, and improve the quality of operations. The Jacksonville, TX, regional distribution centre is located in east Texas, and from the beginning of last year, it became the first in line for measures aimed in this direction. It is from Jacksonville, TX, that Stage Stores supplies branches and customers in the southern and western United States.

Stage Stores called on the expertise and know-how of SDI Systems to develop and implement the requisite concept. Founded in 1977 and headquartered in Los Angeles, CA, SDI is a global specialist in logistics solutions for fashion manufacturers, textile retail chains and fashion houses. Having already implemented most of the industry’s major goods distribution centres in the United States, the company’s execution of the Stage Stores project also made it Ferag’s preferred partner for fashion logistics in North America.

“We were very pleased that SDI Systems chose our Skyfall system as the best and most efficient solution for Stage Stores, having thoroughly examined several alternatives,” Ferag CEO, Jürg Möckli, said. “A smoothly functioning logistics system, where everything from warehousing, to sorting and order picking to transporting, runs without a hitch, is vital to every modern trading company. A disturbance in the supply chain can often have disastrous consequences that can result in lost sales, and can seriously tarnish the company's image. Speed, a certain degree of flexibility, and reliability are rightly considered the decisive factors in order fulfilment for consumer goods,” Möckli continued. This was the reason why the Swiss expanded the Skyfall family and developed the SkySorter specifically for this segment. The Skyfall variant in Jacksonville, TX, carries goods such as garments, shoes and other fashion items; and it can also selectively accumulate, single and re-sequence them. While goods can either be suspended or laid flat, the US chain uses only pouches for transport, which can carry up to 6 kg and accept products up to a maximum size of 14 × 17 × 6.7 inches. There is even the possibility to transport multiple items in one pouch, for example those belonging to one and the same order.

Krish Nathan, CEO of SDI Systems , sees the innovative sortation and overhead conveyor technology from the Zürcher Oberland scoring on several fronts. The Ferag system is modular from the ground up, and from the outset he was impressed by how well it integrates with existing buildings. Fulfilling this requirement was an absolute must for Jacksonville, TX,: 6 pre-buffer and 12 sorting lines as well as the 500-metre long circulation conveyor needed accommodating above the building tract in use as a staff restaurant and administration area. This was where the Skyfall product family could fully show off its advantages in terms of three-dimensional layout and maximum compactness. Basically, this allows a very flexible layout that makes the most of available hall space. Subsequent adjustments and expansion are also achievable with little effort.

There were further crucial points in favour of the SkySorter technology: no other system similarly satisfied SDI Systems’ expectations regarding speed, reliability and efficiency. One benefit of the Swiss system stood out as a particularly unique selling point in the intralogistics market: all the Skyfall variants developed by Ferag operate without drives on downhill stretches. Gravity alone suffices to set individual shuttles and hangers in motion. Like this, even systems with larger layouts get by with comparatively few motors. Despite the gradients built-in to the Stage Stores system to distribute pouchs over four virtual levels, just 16 drives suffice to power almost one and a half kilometres of Skyfall profile. “Skyfall is unbeatable in terms of energy savings and ease of maintenance. Both of these aspects are hugely helpful in reducing operating costs for the customer,” points out Möckli of Ferag.

More than 5,000 transport pouches, two buffer zones with a near-infinitely versatile combination of sortation algorithms (primary buffer plus secondary buffer), and a 3D buffer store for empty pouches make the Skyfall solution implemented in Jacksonville, TX, the largest goods distribution system that Ferag has supplied anywhere in the world to date. The entire conveying and sortation process takes place automatically; manual effort is only required at the 10 feed-in stations and 24 feed-out points. Despite this limitation, the system has enormous performance potential: within an hour it can fill 5,000 pouches and send them up to the two sortation and buffer stores. The system has been running for a few months now, to the complete satisfaction of the fashion chain. Stage Stores is benefiting so strongly that there are already thoughts about expanding the “Star of East Texas”, as the distribution centre is referred to internally.

((Box)) With over 850 stores across 38 states, Stage Stores is one of the largest and most respected providers of cutting-edge branded garments, shoes, fashion accessories, cosmetics and household goods in the US mid-price segment. In many smaller cities especially, the trading group’s logo is part of the streetscape. A service tailored to customers in rural areas ensures that this will remain so into the future, since the company delivers store-ordered goods to customers’ homes at no extra charge. This strong customer orientation resonates well everywhere. And as is virtually a given in the age of the internet: via various online channels trading under names such as Bealls, Palais Royal, Peebles and Stage, Stage Stores offers a product range that exceeds the choice available in brick-and-mortar outlets. Stage Stores cuts a profile as a trading company that is in sync with every aspect of the times, by addressing customers through every kind of channel.

Ferag AG, with its headquarters at Hinwil in Switzerland's Zürcher Oberland, specializes in innovative conveyor and processing technology. The company is regarded as the world market leader in the development, manufacture and marketing of postpress processing systems. Meanwhile the traditional, family-owned company is stepping up activity in intralogistics and the packaging industry. Like its affiliate companies Denipro AG, WRH Marketing AG with its 20 WRH Global subsidiaries, and PMC Print Media Corporation, Ferag is part of the Walter Reist Holding AG corporate group, which employs a staff of more than 800 worldwide.

Debut for Skyfall system with automatic infeed and delivery stations

Optimal linking of assembly processes in the automotive industry with Skyfall