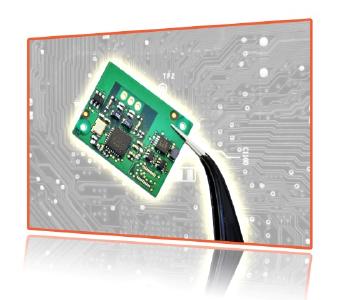 (PresseBox) ( Köln, 16-01-15 )
From now on PANMOBILs RFID scanner, the smartSCANNDY and SCANNDY series, are able to be used in Multi-ISO. Which means in high frequency (HF) section the RFID devices are able to read and write in ISO-Norm 15693 as well as 14443. Before you needed two devices, now you just need one. Which assignment fields Multi-ISO especially effects, describes PANMOBILs application consultant Andreas Fraczek in an interview.

Generally spoken those standards are responsible for the accurate capturing of RFID transponders in the high frequency (HF) section. Both basically differ in their scanning range and when it comes to security. With ISO 15693 there is no possibility to encrypt the storage section of the tags, and therefore unsuitable for paying systems with sensitive account data. Whereas ISO 14443 is perfectly suitable. The most important topic for me in my daily work as a application consultant is the range difference between the two ISO standards. Which is very important for the different application sections, which is interesting for the customers. ISO 15693 has a range up to 20cm. Which I would recommend for example for facility management or site security where special ground sections need to be checked fast and accurate. Whereas ISO 14443 has a very low scan range most of the time only a few millimetre over the RFID tag. That is important for event services where you actually only need to scan the one individual RFID tag instead of all the ones around it.

Yes, that is why it is called “Multi-ISO”. Whoever orders a HF-RFID scanner (high frequency) from PANMOBIL is able to cover both ISO standards at the same time with only one device from now on. It is possible with a new RFID chip and a new antenna in the devices, which we developed. Previously you had to decide which ISO standards you need before you ordered a HF device. Either ISO 14443 or 15693. Now all the application sections which exist for the high frequency section can be covered with only one device. Thanks to the new technology smartSCANNDY and SCANNDY automatically recognize which ISO standard the RFID chip contains and automatically switch and capture the data. Next to both mentioned ISO standards PANMOBILs AutoID tools also support NFC and Desfire which is also a highlight of the new chip. These are further known standards for the RFID section which are applicable in modern application areas.

c. For which application sections are those two RFID standards interesting?

Getting back to the site security: When you instruct a company to monitor a specific ground, where the security staff should control the area at a specific time, for example if a gate is locked, it is not secure to use barcodes to control if the security staff really went to check the door personally, because as we know barcodes can be photographed or otherwise easily forged. The secure way is to use forgery-proof RFID tags. They cannot be imitated. Which means that the security staff actually need to go to the gate and to scan the security tag which is installed at the gate, so that you can protocol everything accurately. This is where ISO standard 15693 is the one for the job. For the event management this wide range of the RFID tag is disturbing. Imagine you want to check a ticket with a RFID scanner and when you push the button the scanner not only scans the ticket in your hands, but also the tickets from the other guest in the queue. Disturbing imagination! Therefore the ISO standard 14443 is suitable, which can only be read a few millimetre above the RFID tag. No matter which of those two ISO standards you need – PANMOBILs HF – RFID devices are capable of both standards now.

The PANMOBIL team from Cologne, Germany looks back to over 30 years of development and distribution of AutoID periphery and data capturing software. PANMOBILs EMMware with SCOUTtechnology terminates mistakes while transferring Barcode/RFID data to the aims ERP system. The embedded Middleware transfers the data completely automatic without any user intervention. Expenses for hotline, installation and maintenance belong to the past.PANMOBILs mobile data capturing devices are iOS and Android certificated and control the barcode area (1D+2D) via laser or its own camera reading system and also RFID(LF,HF and UHF) using its own decoder technology.

Recommend PANMOBIL: Two in one thanks to "Multi-ISO" press release