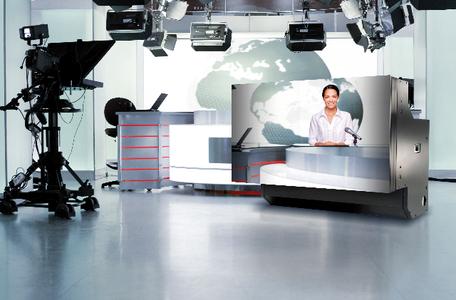 (PresseBox) ( Reutlingen, 10-10-27 )
What is appropriate for continuous operation in a control room is also important in a TV studio. For over a year the company eyevis, being a manufacturer of large screen technology, has focused more on the broadcast sector. eyevis has its roots in the area of large screens for control rooms, process management, and security, but one can often find its "made in Reutlingen, Germany" products in the presentation market as well. Thanks to the high quality of the products that are ensured at the R&D and production location in Reutlingen, the systems by eyevis will suit applications in broadcasting; eyevis products don't just contain the latest developments in the area of display technology-they also set the standards.

This becomes clear considering that eyevis was the first manufacturer on the market to introduce DLP rear projection cubes with LED technology. This type of light source in a projector includes many advantages compared to its lamp-based predecessors. With a lifetime of nearly seven years, the cubes reach a status of being virtually wear-part-free, offering an improved and more stable colour reproduction. eyevis offers the cubes in numerous dimensions with resolutions from XGA, to SXGA+ and full HD up to WUXGA. Compared to LCD video wall solutions the DLP rear projection cubes still offer the advantage of narrower gap between the modules and full 24/7 capability without the danger of static images burning in. Furthermore, the LED-based cubes allow a better colour calibration, with the option of a fully automatic colour tracking function (ACT).

eyevis is always ahead of the game regarding technology-these cubes were shown at the in-house event from September 31 to October 1 of this year. Invited visitors from the AV and broadcast market had the privilege to see the newest developments in the area of professional visualisation. Several new LCD Displays were presented along with the rear-projection cubes.

Especially in the area of the so-called "Super Narrow Bezel Displays," many innovations are expected in 2011. These displays, with a very narrow bezel that makes them suitable for video walls, have so far only been available in 46-inch screen diagonals. For the following year, they will be available in larger sizes with an even narrower bezel. Similar to the trend for TV displays, the new LCD displays count on LED backlights that ensure a better colour presentation with reduced power consumption and both with a more compact design. The new EYE-LCD5500-USN-LHD (55" LCD with "Ultra-Super-Narrow" Bezel and LED Backlight and full HD resolution) offers a direct LED backlight; this means a holohedral illumination of the image surface. With only a 5,7 mm gap between the images of two adjacent devices, the disruptive gap is further reduced. eyevis offers an edgewise LED backlight (so called "edge-lit LED") for its full HD monitors so that the depth of the devices could be reduced to only 4,7 cm.

A completely new technology is the Laser Phosphor displays presented by eyevis, called EYE-LPD. Similar to the concept of former CRT Monitors, an LPD uses an optimised phosphor layer as the medium to create an image. These phosphor cells are illuminated with a laser. With a refresh rate of 240 Hz, the modular design of the housing, and a low power consumption, the EYE-LPDs offer completely new possibilities for the array of video walls-especially for broadcast applications. Each of the seamless units has a 25" screen and a resolution of 320x240 pixels. The new technology also impresses with a brilliant colour presentation and a huge viewing angle.

Much news from the high tech manufacturer from Reutlingen. While the domestic broadcast market reacts calmly to the newcomer, worldwide, many customers in the TV sector decided to use eyevis solutions. RAI WAY in Italy, SIRTI in Lybia, ERTU in Egypt, TV2 in Poland, Teracom in Sweden; all these media companies decided to use eyevis products in front of or behind the camera. Just one reason for the German broadcast market to have an eye on eyevis when it comes to equipping new studios or direction rooms.

eyevis from Reutlingen in Germany is specialized in the development and production of high-quality large screen systems and guarantees a continuous further development in high-tech, quality and complete specific customer display solutions. Besides the rear projection units, based on the DLP(TM) Technology from Texas Instruments and controllers to manage multi-projection walls, eyevis is also developing intelligent software solutions to achieve a complete, unique and perfect large screen system. The name eyevis stands for quality, innovation, flexible and redundant systems and solutions in the field of large screen visualisation. For every application, whether control room or communications, conference or congress area, foyer, show room, information system, exhibition, convention, event or training centre, eyevis offers a solution tailored to your individual requirements with the best image quality. The product range also includes high-resolution TFT LCD monitors and special solutions for simulation and virtual reality applications.

eyevis' ambitious principle has always been the permanent further development of its product range which aspires to include the most modern technologies in perfect quality. The result of this "state-of-the-art" philosophy is the permanent development of products which constitute cutting-edge technology in their field of application. This makes eyevis one of very few manufacturers who are able to provide complete systems - high-end quality "Made in Germany ".

Thanks to its many years of experience and technological advantage eyevis is the ideal partner for the realisation of complete and customised solutions. Continuous investments in research and development guarantee a head start in the field of large screen technology.

eyevis has a worldwide network of offices, subsidiaries and Service & Sales partners that have trained engineers for consultancy, installation and service for eyevis systems in their country or region. Today, after 12 years of experience and presence in the fields of large screen visualisation eyevis has become one of the leading producers of large screen technology. eyevis systems can be found in numerous control rooms and other applications all over the world.