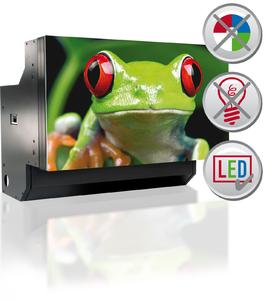 (PresseBox) ( Reutlingen, 10-03-06 )
The most common used technology in command and control rooms are DLP rear-projection cubes, as Plasma or LCD still have some restrictions for 24/7 use and also have bigger bezels than cubes, which are seamless. Up to now the stat-of-the-art DLP cubes were based on High Performance Discharge lamps. These lamps were always the weakest point in the chain, because of their limited lifetime and as they are considered as a consumable without warranty. A very interesting new technology came up recently and eyevis was the first manufacturer who was presenting these new DLP cubes on the ISE in Amsterdam in 2009. Now this new technology has proven its worry-free design at several installations around the globe. We are talking here about DLP cubes with LED light source.

eyevis from Reutlingen in Germany is specialized in the development and production of highquality large screen systems and guarantees a continuous further development in hightech, quality and complete specific customer display solutions. Besides the rear projection units, based on the DLP(TM) Technology from Texas Instruments and controllers to manage multiprojection walls, eyevis is also developing intelligent software solutions to achieve a complete, unique and perfect large screen system. The name eyevis stands for quality, innovation, flexible and redundant systems and solutions in the field of large screen visualisation. For every application, whether control room or communications, conference or congress area, foyer, show room, information system, exhibition, convention, event or training centre, eyevis offers a solution tailored to your individual requirements with the best image quality. The product range also includes highresolution TFT LCD monitors and special solutions for simulation and virtual reality applications.

eyevis' ambitious principle has always been the permanent further development of its product range which aspires to include the most modern technologies in perfect quality. The result of this "stateoftheart" philosophy is the permanent development of products which constitute cuttingedge technology in their field of application. This makes eyevis one of very few manufacturers who are able to provide complete systems - highend quality "Made in Germany ".

Thanks to its many years of experience and technological advantage eyevis is the ideal partner for the realisation of complete and customised solutions. Continuous investments in research and development guarantee a head start in the field of large screen technology.

eyevis has a worldwide network of offices, subsidiaries and Service & Sales partners that have trained engineers for consultancy, installation and service for eyevis systems in their country or region. Today, after 12 years of experience and presence in the fields of large screen visualisation eyevis has become one of the leading producers of large screen technology. eyevis systems can be found in numerous control rooms and other applications all over the world.

Effiziente Geschäftsprozesse sind ein Fundament des Unternehmenserfolges. Zur Aufrechterhaltung und Verbesserung der Effizienz ist vor allem die Automatisierung von Prozessen von entscheidender Bedeutung. Vor der Automatisierung sollte ein Unternehmen die vorhandenen Prozesse allerdings zunächst analysieren. read more
The publisher indicated in each case is solely responsible for the press releases above, the event or job offer displayed, and the image and sound material used (see company info when clicking on image/message title or company info right column). As a rule, the publisher is also the author of the press releases and the attached image, sound and information material.
The use of information published here for personal information and editorial processing is generally free of charge. Please clarify any copyright issues with the stated publisher before further use. In the event of publication, please send a specimen copy to service@pressebox.de.