Cooperation of eyevis, Knürr and BMA Ergonomics showcases a global concept for control rooms as well as numerous technological innovations 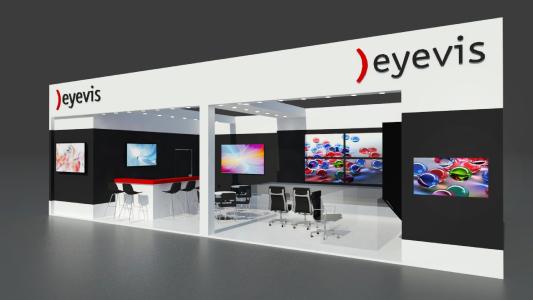 (PresseBox) ( Reutlingen, 16-07-11 )
Security, the world’s leading fair for security and fire prevention, opens its door in Essen from September 27 to 30, 2016. About 40,000 professionals from all over the world are expected to visit the event in order to get an overview of the security industry. For this continuously growing market segment, eyevis, the leading provider of visual display systems for professional applications, will once again exhibit exciting new developments together with Knürr Technical Furniture and BMA Ergonomics at the shared booth B22 in hall 1. The three partners present an all-encompassing concept for control rooms, comprising visual display solutions (eyevis), technical furniture (Knürr Technical Furniture) and special seating for 24-hours operation (BMA Ergonomics).
„Our strengths include the long-life, low-maintenance rear-projection technology, which the entirely new product series of TRP cubes we will present in Essen is based on,” says Michael Schuster, Management Consultant at eyevis, thus pointing to one of the highlights of the fair stand. „Our high-resolution 4K LCD monitors and the LCD series with super-slim bezels for the setup of video walls are some of our other eye catchers. And we are also presenting intelligent solutions with numerous innovations for the management and controlling of video walls!“
In detail, you can expect these innovations at the Security trade fair stand:

Rear projection for 24/7 operation: super-slim or at favourable entry-level price
eyevis DLP® will be exhibited in not one, but two attractive versions at the fair: as the super-thin SLIM series or as the completely brand-new, well-priced TRP series. As the first supplier ever, eyevis has integrated Texas Instruments’ new controlling approach with TRP technology in its DMD unit. While the rear-projection cubes of the super-thin SLIM series feature very low installation depth, the new TRP series stands out due to its extremely favourable entry-level price. It also excels at energy efficiency, making it a true green power solution for video walls. Both versions of the ecCUBE family, the SLIM series as well as the new TRP series are presented at the fair stand to the international expert audience.

4K product range with exemplary 85" and 65" display
With the 85ʺ EYE-LCD-8500-QHD display and the smaller 65ʺ display of the same series, eyevis showcases two examples of its product range of 4K LCD monitors. eyevis offers altogether six models of high-resolution LCD monitors with Quad-Full-HD resolution of 3840 × 2160 pixels, ranging from a 50’’ model up to the largest display with a screen diagonal of 98’’. The monitors are especially suited for the display of multiple camera signals in native resolution on just one screen.
Developed specifically for highly challenging professional applications entailing extreme requirements, the HiRes LCD monitors of the QHD series convince in terms of their unparalleled image quality. High contrast even in very bright ambient light, perfect colour rendering, a large viewing angle and razor-sharp images as well as very short reaction times make these displays a first choice for many application areas. Of course, the displays also feature all other high quality attributes, for which our products are known, such as a robust metal casing and highest reliability during demanding long-term operation.

LCD video wall with new features
A 2x2 video wall comprised of the new 55“ LCD EYE-LCD-5500-XSN-V2 displays is a vivid demonstration of how the single monitors fit together in perfect homogeneity thanks to their super-slim casing bezels. Their outstanding image properties paired with numerous innovative functions and a robust design make these displays a first choice for professional video wall applications. The new V2 version has a loop-through for 4K signals and the so-called Non-Stick Modes, which prevent image sticking effects. Functions such as the Soft Picture Mode, which smooths out extreme contrast transitions, additional Pixel Shifting or Dynamic Pixel Refreshing, maintain the high life expectancy and the constant quality of the monitors even for the permanent display of static image content.

Cross-platform, cross-operating-systems and open source
eyevis not only showcases innovations at Security for visualisation itself, but also for the controlling of video walls. The industry can particularly look forward to the presentation of eyeUNIFY wall management software, which will be presented at Security in the framework of the security industry for the first time. Just having been unveiled in February 2016, eyeUNIFY is already successfully in action.
eyeUNIFY’s modular, web-based concept allows for operation across platforms and operating systems and for a freely scalable number of clients. All modules communicate via web-based so-called SOAP interfaces. As an open-source project, eyeUNIFY is available for free to all users and can be adapted to specialist wishes and needs by eyevis, the client or third parties. The new software covers all usual functions of modern control room software and is open for individualizations and the integration of future developments. Devices by third-party suppliers such as media controllers can remote control the entire wall management
eyeUNIFY is placed under GNU General Public License as free software. “Open source is becoming more and more important in the development of professional solutions due to its various advantages for the user,” Kai Schönberg, Director of IT Development at eyevis, justifies the step towards an OS platform. “Users with high security standards appreciate the additional transparency, provided by disclosing the source code.”

eyevis, the German manufacturer of large scale video systems, is one of the leading providers and integrators of visualization systems for professional applications in control rooms, virtual reality and simulation as well as broadcast and AV. eyevis has a worldwide network of subsidiaries and certified retailers. As one of only a few providers, eyevis is capable of offering entire systems from one source. The complete solutions of eyevis include display solutions, graphic controllers, software applications as well as all necessary accessories.