EVT at the ITE trade fair in Japan 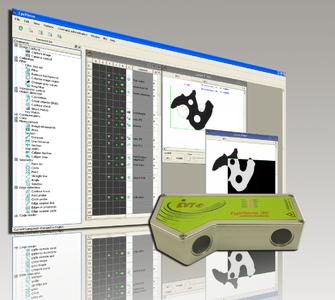 Among the exhibit will be the EyeVision 3.0 image processing software, whose release had been expected for a long time.

Alongside the already well known drag-and-drop programming function of the EyeVision Software, one of the new features will be the support of Asian languages such as Japanese, Chinese, Korean, etc.

With the new release the graphical user interface runs not only on Windows but also on Linux and MacOSX. Additionally the user has the possibility to create and save their own view of the interface with the so called "Layout Manager".

There is also a plug-in interface, which allows the user to create their own commands and also make their own icons, which can be integrated into the EyeVision GUI.

And also very useful is the "Context Help", where information about the commands are given, when the user drags the mouse over the command icon.

At the ITE trade fair EVT will also exhibit the EyeSens 3D sensor to capture for example plate bending parts with a laser line. With this laser line the user can measure and check angles, heights or clearances as well as the thickness of adhesive and sealing beads.

Also at the show in Yokohama is the popular "Bug Tracker", where small battery operated bugs are tracked by a simple USB camera and the EyeVision software, which calculates their position and carries out image processing programs such as pattern matching.

If this sounds interesting to you, we will be happy to welcome you at the ITE show in Japan!

The most important requirement for this is, that the quality of the component part has to be visible, because errors inside the product are not detectable by machine vision.

The applications, which can be realized with the EyeVision software are e.g. the detection of the smallest of surface errors on complete web widths of plastic foils and films. Additionally, with EyeVision the user can monitor the loading and unloading of converting machines with 2D- or also 3D-position detection of the component parts.

Moreover EyeVision is suitable for the control of dimensional accuracy of precision parts or inspection of printed impressions on plastic bottles.

For EyeVision systems pecularities such as high requirements of accuracy and the mostly complicated shaped part in due consideration of parting plains and gating points and the often challenging part geometry, are no problem.

The EyeVision software is created for application in industries such as automotive, electronic, robotics, measurement technology, etc.

Additionally EVT also provides the right camera or smart camera such as EyeCheck or EyeSpector.