Best products at LogiMAT 2010 in Stuttgart 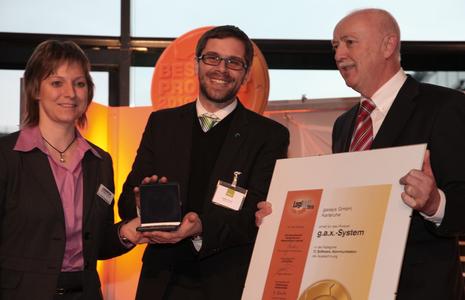 (PresseBox) ( Stuttgart, 10-03-02 )
A system for the Internet of Things, a hoisting aid for order pickers and a software package for the online trade - the winners of the 'Best Product' competition at the 8th International Trade Fair for Distribution, Materials Handling and Information Flow LogiMAT 2010 from 2 to 4 March 2010 are: Lanfer CARGO-TECHNIK, Gebhardt Transport- und Lagersysteme and gaxsys.

Their innovations brought them success. An independent jury made up of academics and journalists chose three lucky winners of the 'Best Product' prize from the entrants from the 760 exhibitors at LogiMAT 2010. Their products meet the conditions of the competition - rationalization, costsaving and increasing productivity - in an outstanding way.

In the opinion of the jury, what all the winners have in common, despite the economic crisis, is investment in innovations. They have developed extremely customerfriendly products and systems with a high usage value. The 'Best Product' prize will be awarded to the winning companies on the evening of LogiMAT's opening day at the Stuttgart Trade Fair Centre.

In the 'Software, Communication, IT' category, the Karlsruhebased company gaxsys won with its modular ecommerce g.a.x.system, a pioneering technology for online trade. 'gax' stands for 'global article exchange'. Following its successful installation at the premium brand Indigo, the system has quickly taken off and combines many revolutionary new concepts in a pioneering Web shop with the complete integration of all logistical functions.

The g.a.x.system by gacsys GmbH controls the entire process chain. It is based on the adaptive software approach. With its modular design this software technology is flexible and can adapt to changing conditions.

The g.a.x.system, which links brand manufacturers, specialized retailers and customers online, stands out due to its optimal networking and complete integration of common factors found in conventional trade structures.

Its special feature is that when orders are placed via the g.a.x.system the geographically nearest specialist dealer is given priority. The g.a.x.system is making an effective contribution to the fight against plagiarism (fake protection) and maintaining the regional infrastructure (support your local dealer) and the environment (green logistics).

In the "Order picking, packaging, protection" category the Chambased company Gebhardt Transport- und Lagersysteme scored points with its exhibition highlight EcoPick, which facilitates picking processes. The device supports hoisting jobs, mainly moving goods from one pallet to another. The hoisting aid makes the mechanical movement of picking easier, relieving the forearms of the pickers and effectively preventing premature fatigue and even great impairment to physical health.

The hoisting aid consists of a hoisting arm, base, cable pull with wrist cuffs, electric drive and electronic control unit. Increase in picking performance of up to ten percent in is possible with the newly developed EcoPick, for a picking session of more than five hours.

Lanfer CARGO-TECHNIK from Borken-Weseke, a company that specialises in the construction of customised materials handling systems and their control systems, won in the "Procurement, handling, storage category for its Internet of Things exhibit THINGtelligence®.

THINGtelligence® is a further development of the joint project 'Internet of Things; alterable realtime logistics systems based on intelligent agents for the area close to the production site' sponsored by the German Federal Ministry of Education and Research. Working with partners from small and mediumsized businesses, an autonomous modular and decentralized conveying system has been developed.

Modernisation projects and subsequent changes to existing systems are implemented much more quickly and flexibly with this intelligent, decentralised system, than is the case with conventional projects or migrations. The focus is on RFID, but classic barcode systems in existing systems can also be integrated into the THINGtelligence® system with no functional limitations. There is rationalisation potential for the commissioning phase, especially through the use of standardised components and the networking between conveyor elements and control technology.

The THINGtelligence® system can bring its strengths to bear in particular if the existing or planned system layout makes a high level of flexibility in the flow of materials possible. Prestartup an analysis shows whether the modification of an existing system to a THINGtelligence® control system is useful and profitable. The questions considered include an asis assessment of the existing hardware and control technology, and the target requirements of the customer with regard to the modernisation or further use of the mechanical components.

Further shortcomings, which could be solved efficiently by THINGtelligence®, are often identified through process changes or while the old system is running.

LogiMAT 2010 is open daily from 9 a.m. to 5 p.m. A one-day ticket costs €28 including participation in the wide-ranging accompanying programme. A copy of the trade-fair catalogue is also included in the price. A three-day ticket costs €35.

BEST PRODUCT 2021 for Excellence in Intralogistics