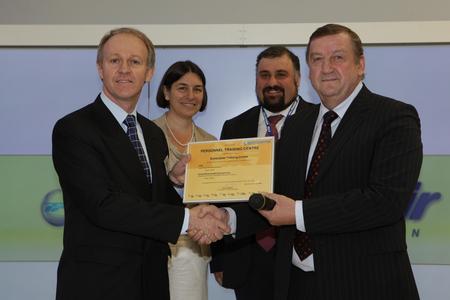 The center is approved for type rating training of pilots and mechanics on AS350 and AS355 helicopters, which are the best selling and most demanded Eurocopter light helicopter with nearly 5,000 helicopters delivered. This challenging project was launched by both partners three years ago with the signature of the frame contract at Heli Russia 2010. Now the center is fully operational and the first training course is scheduled for June 2011.

"Our companies have long partner relations. Start of pilot and engineer training at UTair training center is a new very important stage of successful cooperation. We are proud that our training center is the first one in Russia to be endorsed by Eurocopter: this confirms high level of our specialists', said Andrei Martirosov, CEO UTair Aviation.

"We are very proud to welcome UTair's PTC into the Eurocopter family. It becomes the 20th Training Center in the global Eurocopter network and is the 1st external training center ever certified by Eurocopter Group. This demonstrates UTair's PTC high level of professionalism and training standards, the latter being fully compliant with international regulations", stated Derek Sharples, Eurocopter Executive Vice President for Support and Services.

"We believe that the customization of Eurocopter's global offer through joint projects between Eurocopter Vostok and our Russian partners is a key for the effective follow-up of the Eurocopter fleet in a fast growing market. We are proud to work out this project with UTair, a well-recognized leader on the Russian and global market', said Laurence Rigolini, CEO of Eurocopter Vostok.

As part of the Eurocopter training network, UTair's Personnel Training Center will benefit from all kind of assistance like program updates, audits and Eurocopter's best training practices, thus significantly contributing to the expansion of UTair's services portfolio.

Personnel Training Center is registered as a non-commercial partnership and is one of the largest civil aviation training centers in Russia. The training center is established by UTair Aviation and its subsidiaries UTair Engineering and JSC Center of Transport and Services.

UTair is the number one helicopter company in the world in terms of fleet size and payload that includes more than 250 Russian and foreign helicopters. Since 2006, UTair successfully operates Eurocopter helicopters. In 2010, UTair Aviation's subsidiary UTair Engineering has received a certificate confirming that it is an official MRO Center for Eurocopter helicopters AS350, AS355 N and BO105 for O and I checks. For more than 40 years, UTair trains pilots, stewards, mechanics, and technicians on how to fly and maintain helicopters and airplanes. At the moment, 23,000 students attend UTair's training classes every year. In 2010, UTair has ordered 16 AS350 and 4 AS355 helicopters.