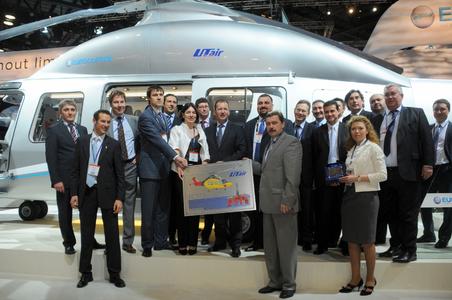 (PresseBox) ( Orlando, Florida, USA, 11-03-08 )
Russia's UTair Aviation today signed a firm contract for the acquisition of 15 EC175 helicopters, extending its long-term strategic partnership with Eurocopter and the Eurocopter Vostok subsidiary in Russia and the CIS.

This agreement, which firms up a letter of intent announced at Heli-Expo in 2008, covers the deliveries of 15 EC175s in 2013 and 2014. It was signed at the Heli-Expo 2011 exposition in Orlando, Florida by UTair Aviation General Director Andrey Martirosov and Dr. Lutz Bertling, President & CEO of Eurocopter. Joining them were Christian Gras, Eurocopter's Executive Vice President Customers, and Laurence Rigolini, the CEO of Eurocopter Vostok.

"UTair will use the EC175s for further market expansion and in our development of the oil and gas segment," Martirosov said. "The quality of Eurocopter products, along with its high level of technical support, gives us confidence in taking these new steps for our further strategic development."

Bertling said UTair's order positions the Russian operator as a major customer for Eurocopter's new 7-ton-category helicopter. "This is another important endorsement for the EC175, and we are committed to justifying UTair's trust in us," Bertling added.

The twin-engine EC175 incorporates a mix of proven and advanced technologies for excellent performance and reliability in a full range of missions, including oil and gas operations, search and rescue, emergency medical transport, and business aviation. Depending on its configuration, the EC175 can accommodate up to 16 passengers.

UTair has been operating Eurocopter rotary-wing aircraft since 2006, with a current fleet that includes the AS350 B3, AS355N and BO105 - which are flown in a wide variety of missions that range from VIP services and oil/gas industry support to medical missions.

"This agreement is another important step in the UTair-Eurocopter partnership," Eurocopter Vostok's Rigolini said. "In Eurocopter's philosophy of being close to its customers, we have created a technical support center, pilot and technical staff academy in Russia, which enables us to further develop our offer for services in this dynamic region of the world."

UTair is among the world's top four civil helicopters operators by volume of operations, and the largest in Russia with a fleet of more than 250 helicopters of all types - primarily Mil and Eurocopter. Active in the oil and gas industry for over 40 years, UTair Aviation also is the largest provider of transport services for United Nations peacekeeping missions.

Established in 1992, the Franco-German-Spanish Eurocopter group is a division of EADS, a world leader in aerospace, defense and related services. The Eurocopter group employs approximately 15,600 people. In 2010, Eurocopter confirmed its position as the world's No. 1 helicopter manufacturer in the civil and parapublic market, with a turnover of 4.8 billion euros; orders for 346 new helicopters; and a 49 percent market share in the civil and parapublic sectors. Overall, the group's products account for 33 percent of the total world civil and parapublic helicopter fleet. Its strong worldwide presence is ensured by its 27 subsidiaries and participations on five continents, along with a dense network of distributors, certified agents and maintenance centers. There are 11,200 Eurocopter helicopters currently in service with nearly 2,900 customers in 147 countries. Eurocopter offers the largest civil and military helicopter range in the world.