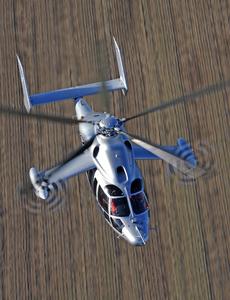 (PresseBox) ( Marignane, France, 11-05-16 )
Eurocopter’s X3 hybrid helicopter demonstrator has delivered on the promise of pushing the frontiers in rotary-wing aviation by surpassing its original speed target of 220 kts. demonstrating the compound aircraft’s performance, capabilities and maturity.
The X3’s speed milestone was reached on May 12 during stable, level flight – with the hybrid demonstrator maintaining a true airspeed of 232 kts. (430 km./hr.) for several minutes. This occurred during only the third mission after a scheduled upgrade that integrated the X3’s definitive gearboxes, enabling it to operate at full power.
“Eurocopter’s teams have once again shown their ability to apply innovation as a cornerstone of our strategy in remaining the helicopter industry leader,” said Lutz Bertling, Eurocopter’s President & CEO. “Future helicopters incorporating the X3 configuration will offer our customers about 50 percent more cruise speed and range at very affordable costs, therefore defining the future of high productivity rotary-wing aircraft.”
Aboard the aircraft were Eurocopter test pilot Hervé Jammayrac and flight test engineer Daniel Semioli “We were impressed by the ease at which this speed objective was attained,” Jammayrac explained. “The X3 handles extremely well, demonstrating remarkable stability at high speed – even with the autopilot off. We are very proud of this achievement, which results from the dedicated efforts of all those who have worked on the project.”
Eurocopter began X3 flight testing last September in a program that combines the excellent vertical takeoff and landing capabilities of a helicopter with aircraft-type fast cruise speeds of more than 220 kts. After the X3 achieved the initial true airspeed goal of 180 kts. (333 km./hr.) in November at a reduced level of engine power, the X3 underwent its planned gearbox upgrade and safety inspection.
Since returning to flight last week, the X3 quickly demonstrated its performance at full engine power, including impressive climb and descent rates, as well as excellent maneuverability, while also confirming the hybrid propulsion system’s outstanding capabilities for acceleration and deceleration.
In the test program to date, the X3’s basic handling characteristics and stability have been validated throughout the aircraft’s flight envelope without the need of a stability augmentation system, which has been confirmed in testing performed with the autopilot disengaged and engaged. In addition, the hybrid aircraft has low vibration levels without the use of passive or active anti-vibration systems, providing flight characteristics comparable to those of the best traditional design helicopters currently in service.

The X3 utilizes a Eurocopter Dauphin helicopter airframe equipped with two turboshaft engines that power a five-blade main rotor system and two propellers which are installed on short-span fixed wings. This hybrid configuration creates an advanced transportation system offering the speed of a turboprop-powered aircraft and the full hover flight capabilities of a helicopter.
The company envisions a wide range of utilizations for this concept, including long-distance search and rescue (SAR) missions, coast guard duties, border patrol missions, passenger transport, offshore operations and inter-city shuttle services. It also could be well-tailored for military missions in special forces operations, troop transport, combat SAR and medical evacuation – benefitting from the hybrid aircraft’s combination of higher cruise speeds with excellent vertical takeoff/landing performance.
Flight testing of the X3 is being performed from the DGA Flight Test Center in Istres, France. The flight test program will continue throughout 2011 to explore the hybrid helicopter’s full flight envelope and evaluate all of the possibilities offered by this new technology.