The AS350 B3 Helicopter Proves Its High-Altitude Performance with Rescue on Mt. McKinley 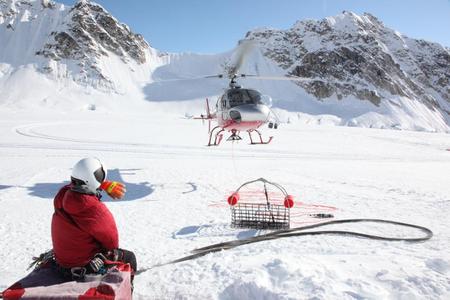 (PresseBox) ( Marignane, 11-05-23 )
The AStar family of helicopters has become the platform of choice for a variety of missions throughout the world. From law enforcement to utility and from tour to air medical and Search and Rescue, customers across the globe depend on the performance and reliability of their AStars to complete their vital missions.

On Thursday, May 12, 2011, an AS350 B3 helicopter from the Denali National Park & Preserve was performed a high-altitude rescue on Mt. McKinley of an injured climber, who had broken his leg in a fall near the summit. It was one of the highest rescues recorded on Mt. McKinley.

"We would like to commend the pilot and everyone involved in this extraordinary rescue," stated Marc Paganini, President and CEO of American Eurocopter. "Eurocopter helicopters are designed and built to meet and exceed the demanding missions of our customers. Rescues like this show the commitment of our customers to doing what it takes to complete the mission and their confidence in our aircraft."

The AS350 B3 helicopter is provided and operated by TEMSCO on an exclusive-use contract to the National Park Service (NPS) in the Denali National Park & Preserve and is primarily used for mountain rescues. This rescue occurred at 19,833 ft. The summit of Mt. McKinley is at 20,320 ft., and it is known for inclement weather conditions.

The pilot of the AS350 B3 was Andreas Hermansky, a TEMSCO employee, and he knew that this was not going to be a routine rescue.

"With a rescue of this magnitude at this altitude, the mission is so complex," he said. With wind gusts to 70 mph and the temperature well below zero, confidence in the aircraft and the pilot's abilities is a must. Hermansky explained that to be ready for a rescue at this altitude, he had to know the area, the aircraft and its performance at altitude with flights to summit. "Rescues up here are so much more than just flying an AStar. I have landed on the summit a couple of times in various conditions, so I was comfortable with the aircraft and knew it could handle this mission."

Mt. McKinley is a popular mountain for climbers from around the globe, and more than 1000 have registered to climb it this year alone. Joe Reichert, Denali National Park Ranger and South District Helicopter Manager, explained that each year they conduct evacuations from several locations and altitudes on the mountain. "We have on average about 20 to 25 evacuations and SAR missions each year. The AS350 B3 provides us with the high-altitude performance we need to cover Mt. McKinley and the extreme conditions we encounter. The most recent high-altitude rescue is a perfect example of that."

The AS350 B3 from TEMSCO also provides a variety of mission support for the Denali National Park & Preserve, in addition to search and rescue. "This helicopter gives us the power and flexibility we need to perform many functions throughout the preserve including resource management, hauling equipment, ferrying researchers to remote locations and repeater work," continues Reichert.

This multi-role appeal is also why TEMSCO has three AS350 B3s in its fleet. "The AS350 B3 is a true multi-role helicopter," said Joe Hicks, Senior Vice President of TEMSCO Helicopters. "It has outstanding external load capabilities, and its hot & high performance allows us to haul drills for geological surveys, assist the U.S. Forest Service with field work, conduct firefighting missions, assist with construction, and perform SAR missions, like the one on Mt. McKinley."

TEMSCO (an acronym from the words: Timber, Exploration, Mining, Survey, Cargo Operations) was founded in 1958 in Ketchikan, Alaska. TEMSCO has operated AStars since 1983. It was one of the launch customers for the AS350 B3 in the United States and helped shape the development of the aircraft due to the wide variety of missions the company performs. "We took delivery of the second AS350 B3 in the U.S., and TEMSCO has really grown with the B3," added Hicks. Its helicopter fleet has grown, as it has expanded its operations into tourism, hospital transport, firefighting, and other growing markets.

TEMSCO will have a fourth AS350 B3 delivered at the end of May.

Recommend The AS350 B3 Helicopter Proves Its High-Altitude Performance with Rescue on Mt. McKinley press release