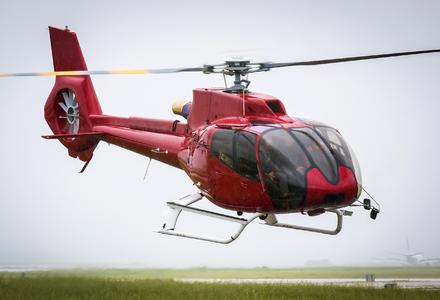 Equipped with a new cargo sling, the H130 version will demonstrate its versatility by performing a full range of aerial work assignments, while also supporting the Swiss operator's other missions - including passenger transport and emergency medical airlift services.

"We look forward to the service introduction of our H130, which brings a modern, high-performance helicopter to our fleet that also meets the latest safety standards," explained Air Zermatt CEO Gerold Biner.

The H130's new cargo sling system has a hook capacity of 1,500 kg. When its load is released, the hook automatically transitions to a forward position, which allows maintaining the necessary fuel tank crashworthiness.

"Air Zermatt is a worldwide reference for aerial work operations, and we are proud it has selected the H130 to further develop this activity," said Thomas Hein, Airbus Helicopters' Vice President - Head of Western Europe.

Other Airbus Helicopter-built rotorcraft types currently operated by Air Zermatt are five AS350 B3s from the Ecureuil/AStar family and two SA315 Lamas.

The H130 is an enhanced version of Airbus Helicopters' EC130 B4 rotorcraft providing exceptional capabilities for aerial work and heavy-lift operations in a full range of operating conditions - especially high-altitude, mountainous terrain. It is also tailored for passenger transportation, sightseeing and VIP duties, as well as medical airlift, law enforcement and surveillance missions.

Featuring an upgraded gearbox and a new Turbomeca Arriel 2D engine, the H130 provides 10 percent more average power than the previous EC130 B4 version. Performance improvements for the H130 include a higher maximum gross takeoff weight (2,500 kg. for internal loads, and 3,050 kg. when carrying external loads) and a speed increase of up to 10 knots.

The H130 has a spacious cabin for one pilot and up to seven passengers, depending on the configuration.