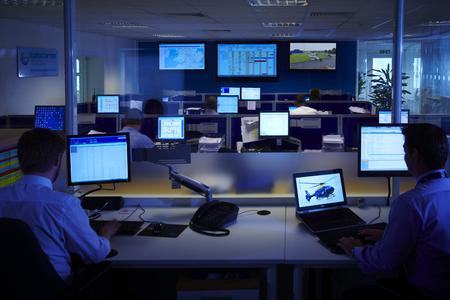 Located at Oxford Airport and operated by Eurocopter UK, this facility manages more than 2,000 maintenance events per year at Eurocopter bases in Oxford and Hawarden/Wales, as well as on customer operating locations in the UK and Ireland.

"Maximizing our service capabilities to provide customers with the best aircraft availability is a total commitment of Eurocopter, and we back this engagement with investments in new facilities, IT systems, mobile support units and our staff - meeting even the most demanding circumstances, such as the Olympic games," said Markus Steinke, the Managing Director of Eurocopter UK. "Our Maintenance Mission Control Center at Oxford is part of the strategy to develop state-of-the-art, around-the-clock, efficient services - all provided locally, be it to individual helicopter owners or large fleet operators."

Eurocopter UK provides one-stop-shop solutions to more than half of the UK police air support units and to a large population of private, utility and air ambulance operators across the country.

During the Olympic Games, an estimated 7,000 flight hours of police and security air units will be supported by Eurocopter's Maintenance Mission Control Center. Steps taken by Eurocopter UK at this operational center for the Olympic Games include a doubling of such critical resources as the aircraft-on-ground hotline and technical services, implementation of a 24/7 maintenance duty roster, the management of vendor support for systems ranging from engines to mission equipment, and operation of 20 GPS-tracked mobile units. The local Olympic support is further backed-up by dedicated resources of Eurocopter's primary facilities in Marignane, France and Donauwörth, Germany.

"A total of 30 Eurocopter-built aircraft - including EC135s, EC145s and Puma MK1s - constitute the helicopter backbone for the Olympic Games' security, operated by the London Metropolitan Police, the adjoining cities' police forces, the British Special Forces and the Royal Air Force," added Steinke. "We are ready to support all involved in these vital duties."

Established in 1992, the Franco-German-Spanish Eurocopter Group is a division of EADS, a world leader in aerospace and defense-related services. The Eurocopter Group employs approximately 20,000 people. In 2011, Eurocopter confirmed its position as the world's number one helicopter manufacturer with a turnover of 5.4 billion Euros, orders for 457 new helicopters and a 43 percent market share in the civil and parapublic sectors. Overall, the Group's helicopters account for 33 percent of the worldwide civil and parapublic fleet. Eurocopter's strong international presence is ensured by its subsidiaries and participations in 21 countries. Eurocopter's worldwide network of service centers, training facilities, distributors and certified agents supports some 2,900 customers. There currently are more than 11,300 Eurocopter helicopters in service in 149 countries. Eurocopter offers the most comprehensive civil and military helicopter range in the world and is fully committed to safety as the most important aspect of its business.