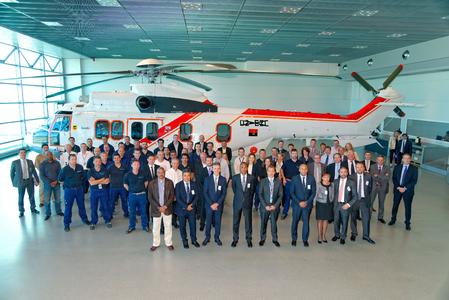 (PresseBox) ( Marignane, France, 14-05-06 )
Airbus Helicopters' EC225 presence in the African oil and gas heli-lift market will expand following delivery of an additional workhorse rotorcraft to SonAir, which is to deploy this long-range helicopter on operations in Angola.

As a subsidiary of the Sonangol Group - a structured aviation service provider in Angola, and the largest African helicopter operator - SonAir will utilize the newly-delivered EC225 in oil and gas transport duties with an existing customer.

SonAir is in the process of adding a total of five additional EC225s to its inventory, three of which will be leased from Milestone Aviation Group, while two others will be owned outright by SonAir, permitting the company to initiate heli-lift business with three new partners and two existing customers.

"The expansion of SonAir's EC225 fleet underscores their confidence in this powerful helicopter for highly-demanding missions," said Airbus Helicopters CEO Guillaume Faury. "It reinforces our long term relationship and our commitment to fully support their growing activity in Africa."

"By growing our fleet, SonAir will benefit from the EC225's performance, range and power," Andrade explained. "We look forward to continuing to serve our customers with one of the best aircraft in oil and gas helicopter transportation."

The EC225 is an 11-ton-class rotorcraft in Airbus Helicopters' Super Puma family. With more than 300,000 flight hours logged in worldwide service to date, it is deployed in duties ranging from offshore transportation and cargo airlift to search and rescue (SAR), parapublic operations and military missions.

SonAir Serviço Aereo, SA, a subsidiary of Sonangol Group, is a structured aviation operator in Angola, using both helicopters and planes, providing services to all major oil & gas companies as its core business and also to the State as complementary business. SonAir started as an aviation department and today, after 35 years in the industry operates a fleet of over 25 helicopters. SonAir's mission is to provide safe and reliable air transportation services, assuring an optimal economic balance. SonAir is today the largest African helicopter operator and 90 percent of the fleet is dedicated to the Oil and Gas, flying both offshore and onshore. The onshore flying is also supported by fixed wing activity. The workforce rounds about 1000 employees, mainly nationals: the expat workforce is less than 15 percent. Internationally, SonAir also offers a closed charter, direct service from the US to Angola dedicated to the Energy industry. Our vision is to be the leading operator of air transportation in support of the national Oil and Gas Industry, with regional expansion, acting safely, with quality and competitively.