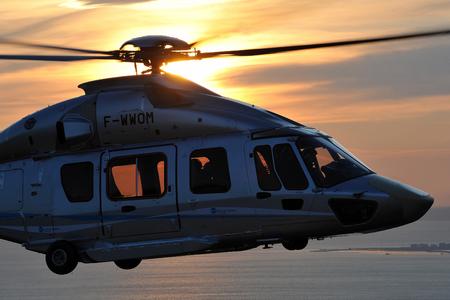 (PresseBox) ( Anaheim, California, 14-02-25 )
Noordzee Helicopters Vlaanderen (NHV) has ordered six more Airbus Helicopters EC175s, increasing its acquisitions of the new-generation rotorcraft to 16. NHV is an EC175 launch customer, booking its first contract for 10 of the mid-sized, twin-engine helicopters in 2012.

"We - NHV and our customers - having experienced the EC175's performance first-hand, have full confidence in the helicopter's capability to meet NHV's operational needs and in Airbus Helicopters' ability to deliver on its program commitments," said NHV CEO Eric Van Hal. "This second EC175 acquisition also continues our strategy of owning and operating a young fleet with the most modern systems, which enhances NHV's mission capabilities and contributes to safe operations. Following the EC175's recent certification, we look forward to the start-up of deliveries with this latest member of Airbus Helicopters' product line in the heavier mid-sized rotorcraft category."

Based in Ostend, Belgium, NHV is specialized in business-to-business aviation services. Its helicopters are deployed to nine different countries on three continents. NHV's missions range from services for the oil and gas industry to heli-lift duties for harbor pilots, wind farm operators, governments and hospitals.

Deliveries of NHV's first EC175 is planned later this year.

"There is no better endorsement than a reorder - especially from an operator with such demanding mission requirements and high standards as NHV," said Airbus Helicopters CEO Guillaume Faury. "NHV can count on the full resources of Airbus Helicopters for its EC175 service introduction."

Airbus Helicopters has committed significant resources to ensure optimized aircraft maturity and a successful entry in service for the EC175, supported by a dedicated task force and tools that include validated support and services deliverables, along with the establishment of training capabilities. As part of this strategy, the company is locating the first EC175 Level D full-flight simulator in France.

The EC175 has been certified to the latest airworthiness standards, covering both the helicopter and its new Helionix® avionics suite - which provides increased safety through reduced pilot workload, enhanced situational awareness, improved flight envelope protection and system redundancy.

Powered by Pratt & Whitney Canada's latest PT6 engine, developed specifically for this helicopter- the PT6C67E version - the EC175 has become the industry's benchmark medium-sized twin-engine rotorcraft across a full range of missions, including transport duties in oil and gas operations, corporate and executive transport, search and rescue, emergency medical services and public services.

Contributing to the EC175's competitive edge is its speed and comfort. At a cruise speed of 165 kts., the helicopter operates with extremely low vibration levels.