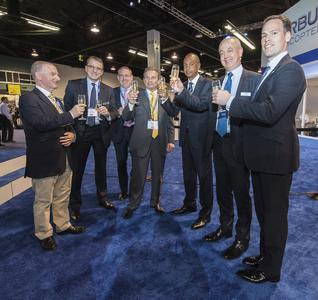 The arrangements, announced today on Airbus Helicopters' stand at the 2014 Heli-Expo exhibition, are part of a newly launched, long-term partnership between Milestone and SonAir to continue serving the oil and gas industry in the region.

Deliveries of the new EC225s are planned during the first and second quarters of 2014, with the helicopters joining Airbus Helicopter-built EC225, AS332 L2 and AS365 N3 rotorcraft already in the SonAir fleet.

"As the largest African oil and gas helicopter operator, we rely on the EC225, with its range, capacity and overall performance, to perform challenging missions in tropical environments. This transaction for near-term EC225 deliveries allows us to maintain our leadership position in the offshore oil and gas market." said SonAir CEO João Andrade. "Milestone has provided us with customized, flexible terms on operating leases for EC225s that meet our needs, allowing us to fulfill the requirements of our customers, delivering value and operational leverage for our company."

Milestone Aviation Group is headquartered in Dublin, Ireland, and has concluded more than US $2.0 billion in lease transactions with customers that range from the largest global helicopter users to small- and mid-sized operators.

"SonAir is one of the world's great helicopter operators, and Angola is an important and growing region for offshore oil and gas production," said Milestone Chairman and CEO Richard Santulli. "We are proud to announce what we intend to be a long and mutually beneficial partnership with SonAir. It is testament to the global demand and desirability of the EC225 and our strong relationship with Airbus Helicopters that we are able to meet SonAir's requirements and initiate our partnership at this time."

The EC225 is Airbus Helicopters' latest version in its Super Puma family, providing a high-performance rotorcraft in the 10-11 metric ton category. This heavy twin-engine helicopter's modern technologies, excellent useful load, five-blade main rotor and low vibration levels make it an efficient solution for oil and gas missions - including offshore and passenger transport as well as search and rescue (SAR) operations.

"This leasing arrangement with SonAir is another endorsement of the EC225's capabilities to serve in the most demanding operating environments," added Dominique Maudet, Airbus Helicopters' Executive Vice President Global Business and Services. "Worldwide, some 30 different users are flying the EC225, with the helicopter logging over 300,000 flight hours to date."

SonAir Serviço Aereo, SA, a subsidiary of Sonangol Group, is a structured aviation operator in Angola, using both helicopters and planes, providing services to all major oil & gas companies as its core business and also to the State as complementary business. SonAir started as an aviation department and today, after 30 years in the industry operates a fleet of over 25 helicopters. SonAir's mission is to provide safe and reliable air transportation services, assuring an optimal economic balance. SonAir is today the largest African helicopter operator and 90 percent of the fleet is dedicated to the Oil and Gas, flying both offshore and onshore. The onshore flying is also supported by fixed wing activity. The workforce rounds about 1000 employees, mainly nationals: the expat workforce is less than 15 percent. Internationally, SonAir also offers a closed charter, direct service from the US to Angola dedicated to the Energy industry. Our vision is to be the leading operator of air transportation in support of the national Oil and Gas Industry, with regional expansion, acting safely, with quality and competitively.

Milestone Aviation Group is the global leader in helicopter leasing. Since launching in August 2010, and as of December 31, 2013, Milestone has acquired 143 aircraft valued at over US $2.2 billion and closed leases with 26 operators in over 20 countries on six continents. The company has a forward order book of over 130 firm and option aircraft valued at over US $3.0 billion. These near-term delivery positions of in-demand helicopters are made available for lease globally. Milestone partners with helicopter operators worldwide and supports them through 100 per cent operating lease financing. The company provides financing for helicopters, serving a variety of industries, including offshore oil and gas, search and rescue, emergency medical services, police surveillance, mining and other utility missions. Further information is available at www.milestoneaviation.com.