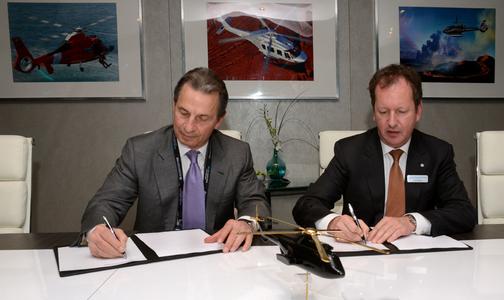 Eurocopter's embrace of a partnership with Milestone on the EC225 is a major development for the helicopter industry. Since launching in August 2010, Milestone has provided over US $500 million in finance to high quality operators around the world including Bristow, CHC and Inaer. Now Milestone can deliver increased value to its customers through timely delivery slots for EC225 aircraft allowing its partners to bid on tenders.

Richard Santulli, Chairman of Milestone Aviation Group, said, "This historic order enables Milestone to provide our customers with the best aircraft and product options available. The EC225 has a great pedigree and a reputation for providing leadership in safety and high reliability in demanding operating conditions." He continued, "I leased all of the original Super Pumas, the EC225's predecessor, delivered in North America in the 1980's with my old company RTS Helicopters, so this deal signals the resumption of a very important partnership."

"The EC225 is a remarkable aircraft and we are excited to be able to offer it to a broader audience of potential operators through our partnership with Milestone," said Lutz Bertling, Eurocopter's President and CEO. "By removing the capital hurdle associated with ownership we are hopeful that we can introduce the EC225 to more operators around the world."

Eurocopter's EC225 offers superior speed, range, payload, optimal safety and reliability. Deployed worldwide for civil and military search and rescue, as well as off-shore and passenger transport missions, it is the latest-generation member of the Super Puma/Cougar family, which has logged more than four million flight hours in operations around the globe.

The EC225 is perfectly adapted to missions in severe weather, as it is designed to meet the highest safety standard levels with system redundancy, a highly capable automatic flight control system, and the capability for full deicing - which allows flight in all known icing conditions.

When configured for offshore crew change operations in support of oil and gas producers, the EC225 can be rapidly converted for search and rescue operations.

"We are honoured that Eurocopter has shown this trust in Milestone by partnering on the EC225", said William Kelly, Milestone's CEO. "We look forward to working closely with our partners as we place these helicopters with high-quality operators around the world providing mission critical services in the oil and gas industry, parapublic services, mining and search and rescue"