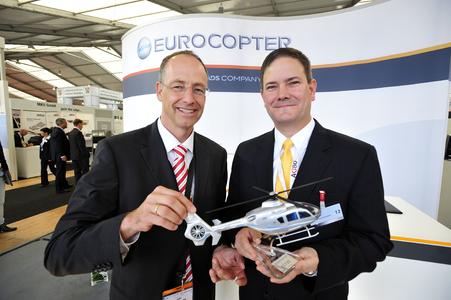 (PresseBox) ( Berlin, 12-09-13 )
Today, at an event during the ILA Berlin Airshow 2012, American Eurocopter announced that Med-Trans Corporation, an industry leading air medical provider, has signed an agreement to purchase up to 16 EC135® helicopters. The order includes 10 firm bookings and options for an additional six helicopters. The new EC135s will help Med-Trans sustain its market growth and expansion.

"This selection of the EC135 as the base of its expansion exemplifies Med-Trans' trust and commitment to our aircraft and our company," said Marc Paganini, President and CEO of American Eurocopter. "Med-Trans has been a valued customer for many years and we are delighted to continue our long-standing relationship with it and look forward to supporting its continued growth."

The EC135 has established itself as one of the premier helicopters in the U.S. air medical market. One of the highlights of this was Med-Trans' selection of the EC135 as the platform for many of its life-saving air medical programs in 2007 with the purchase of eight EC135s and eight options.

Med-Trans currently has 20 EC135s in its fleet "We originally selected the EC135 because we wanted a fleet that was not only versatile and reliable, but one that also provided a flexible and adaptable platform that would meet current mission demands and grow with us to meet the needs of our expanding customer base," explained Fred B. Buttrell, President and CEO of Med-Trans Corporation. "With the addition of these new EC135s we will be able to continue to provide economical aircraft solutions that maximize patient care and partner satisfaction throughout our wider service regions."

The EC135 was designed to meet the demands of operators in variety of mission environments. The aircraft provides high performance, extended range, flexibility, and reliability.

"We know that HEMS operators especially appreciate the outstanding maneuverability and cabin size of the EC135. We are happy that this aircraft has become the twin-engine helicopter of choice in the air medical services industry in the United States and other countries", said Wolfgang Schoder, Eurocopter's Executive Vice President, Programs.

Visit Eurocopter at the ILA Berlin Air Show both in the HeliCenter (Hall 3, Booth 3636) and in the EADS Pavilion.

Med-Trans Corporation, headquartered in Dallas, Texas, is a leading provider of air ambulance programs throughout the United States. A proven solution to our partners, Med-Trans offers an array of customized air medical program designs including hybrid models, community based models or traditional hospital-based models. The company's extensive fleet rapidly delivers teams of highly trained professionals to patients, striving to provide the patient with the best possible outcome. For more information, please visit: www.med-trans.net

American Eurocopter is the U.S. affiliate of Eurocopter, the largest helicopter manufacturer in the world, and a subsidiary of EADS North America Holdings, the North American operations of EADS, the second largest aerospace and defense company in the world. American Eurocopter is a helicopter manufacturer and markets, sells and supports the broadest range of civil and parapublic helicopters offered by any manufacturer. The product line represents the most costeffective, technologically-advanced helicopters, ranging from light single to heavy twin, serving all markets and missions. Company headquarters and main facility are in Grand Prairie, TX, with a large manufacturing and production facility in Columbus, MS.